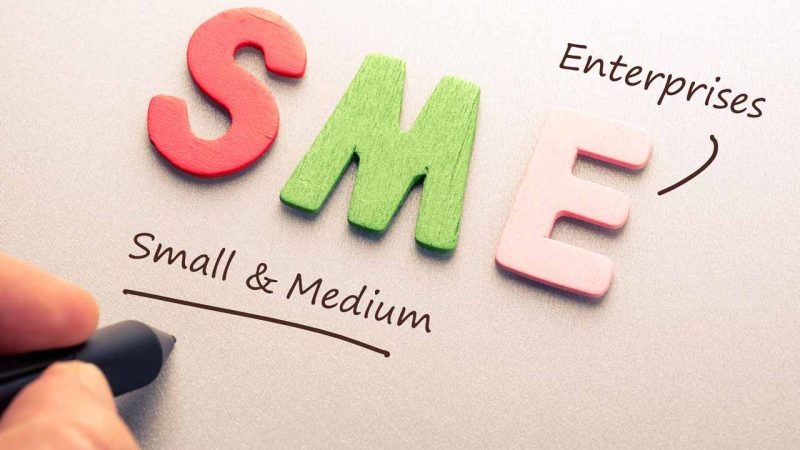 Micro, Small and Medium Enterprises (MSMEs) operating in the country are currently reeling from the impact of economic downturn, brought about by the Covid19 pandemic and bad economic policies enacted by the Federal Government, Business Hallmark findings can reveal

The sector, according to the latest report released by the Nigeria Bureau of Statistics (NBS), contribute 48% of national Gross Domestic Product GDP), accounts for 96% of businesses and 84% of employment.

Also, data obtained by BH on the website of Small and Medium Enterprises Agency of Nigeria (SMEDAN) suggests that there are 17.4 million enterprises operating in the country, with about 50 per cent of industrial jobs and nearly 90 per cent of the manufacturing sector.

However, despite the significant contribution of SMEs to the Nigerian economy, challenges still     persist which hinder the growth and development of the sector.

Findings revealed that the Coronavirus pandemic, which berthed in the country in February, compounded the already bad situation the sector had found itself in. Available data revealed that there was a plunge in exchange of goods and services between the period of April and August, forcing many companies to lay off many workers.

According to most of the operators who spoke with our Correspondent in Lagos, they are now left with inadequate capital and small reserves to fund their businesses after enduring a prolonged lull in economic activities.

“The period between March and June when the nation was under lockdown was particularly bad for us”, declared the manager of a uniform sewing company with a workshop in Ibafo,   Ogun State.

According to the top executive of the medium sized firm which specializes in sewing uniforms for airline pilots and air hostesses, school uniforms, security outfits, hotels staffs, among other clients, things have not been the same ever since the pandemic.

“We get 50 per cent of our income from schools which ordered for customised uniforms. Owing to the closure of schools for six months, our business suffered. Even after resumption, many parents are refusing to buy new uniforms for their wards, but are forcing them to put on old ones due to paucity of funds.

“The last time I went to a school to receive an order, I met several parents complaining to the administrator that they have lost their jobs, and while most of those still lucky to be working said they have been receiving between quarter and half salaries for over four months now. They argued that as long as their children uniforms are not torn, they would manage it until the situation improves.

“We also sew uniforms for pilots, air hostesses, hotels workers, security guards and other clients. As you know, these sectors are in serious trouble. Many pilots and airline workers have been sacked. Hotels are not working at full capacity. So there are no incentives to acquire more uniforms.

“In fact, we have been calling the management of one big hotel in Ikoyi that gave us a big order since February, just before the outbreak of the disease, to come and pick up their finished jobs. But they are not forthcoming. They even suggested to us that if we find buyers for the curtains and bed covers, we should go ahead and sell for them as they won’t need them for now. As it stands, we have millions of naira of unpaid balances customers are still owing us”, lamented the garment factory executive.

Before the outbreak of Covid19, most MSMEs were barely managing to survive the harsh economic environment, including high operating cost (power, transportation, accommodation and multiples levies by government agencies).

According to many of the respondents, the poor state of infrastructure in the country is their     major headache. They maintained that only few entrepreneurs could survive without power.

“The epileptic power supply has contributed significantly to the high cost of doing business. At the end, we are left with almost nothing”, declared Mr. Segun Bewaji, a bottled water producer in Agege, Lagos.

He named lack of good access roads and other social amenities among other factors that have hindered the growth of his water business.

Another major constrain faced by SMEs operating in the country is lack of access to funds. Most SMEs, BH findings revealed, find it difficult to access funds or capital to run their businesses.

Some of the operators who spoke with our Correspondent said banks refused to support them because they could not provide the required collateral.

“Most times, we go to non-conventional institutions with high interest rate to source for funds. Most of us have had our fingers burnt in the process, said Emenike Orji, who produces aluminum products.

Another challenge that is haunting SMEs operating in the country is bureaucratic bottle neck of various government agencies like CAC, NAFDAC, and Customs.

For instance, getting NAFDAC approval for food item or drug takes years and very expensive. Operators also complained of spending about 3 to 4 times the official price to facilitate approval for their products.

A herbal medicine producer who did not want his identity mentioned, said the cost of getting approval for his products and the time it takes to get it is killing his business.

“The last product I registered took me almost two years to get it approved by NAFFAC. That is even small. You can spend as much as N750,000 to get NAFDAC approval for just one product even after meeting all the specified requirements.

Another major challenge faced by SMEs, which is dwarfed only by poor electricity and effects of Covid, is that of multiple taxes and levies

BH reliably gathered that SMEs are subjected to many taxes and levies from local, states and federal governments. Findings revealed that so many agents are involved in the collection of taxes and levies, given room for unauthorized levies and taxes. The impact of this on the operational costs of SMEs cannot be overemphasized, operators argued.

Troubled by this development, industry watchers have warned that if the trend is not reversed, it will impact negatively on the overall GDP of the nation in 2020.

The President, Association of Small Business Owners of Nigeria (ASBON), Dr Femi Egbesola, said that if urgent steps are not taken to change the slide, more SMEs will fold up and that the nation will suffer dearly for it.

“No doubt, with the scourge of the COVID-19 pandemic, figures and statistics that are being brandished around by NBS will drop. The MSME sector, particularly the manufacturing is the worst hit with the negative effects of the pandemic.

“Quite a number of MSMEs have closed shop and more will fold up or become ailing in no distant time. We (MSMEs) do not have the ability to bear the shocks created by this pandemic,” Egbesola said.

He noted that efforts by government to rescue the sector have failed to achieve desired results.

“Although, government has tried quite a number of palliatives especially in the area of finance, the effects has been highly insignificant because the beneficiaries are very minute compared to the population of MSMEs in the country”, Egbesola said, while warning that if nothing urgent is done by government to arrest the pending disaster in the MSME sector, quite a number of jobs will be lost as it is already happening.

“The contribution of the SME to the national GDP will drop drastically, crime and vices will be on the increase, high inflation rate will be the order of the day, while the purchasing power of the consumers will nose dive, the ASBON boss warned.

Also, the President, Association of Micro Entrepreneurs of Nigeria (AMEN), Prince Saviour Iche, said the impact of coronvirus (COVID-19) has left small businesses with little reserves and working capital to work with.

Iche expressed concerns that despite government efforts to assist small businesses, SMEs were still shutting down. He noted that many local businesses have been hit by rising costs and monetary tightening at bank levels.

An economist, Dr. Abiodun Turner, noted that SMEs account for two-thirds of Nigeria’s employment and GDP, warning that failure to protect them could put the nation’s economy at risk.

However, BH checks suggest that governments at the state and national levels have at one point or the other, launched initiatives to help address some of the challenges faced by SMEs. Some of the measures include various grants by the Federal Government, low interest loan from the Bank of Industry (BOI) and Bank of Agriculture, CBN’s SMEs Initiatives through the banks.

Likewise, Lagos State has also intervened through the Lagos State Entrepreneurial Trust Fund (LETF). Unfortunately, the gestures seem to be too little to have meaningful effect.

Meanwhile, in an effort to bail out the ailing sector, the Federal Government has flagged off two schemes to financially support about 1.7 million micro small and medium enterprises across the country with N75bn.

At the flag-off of the two schemes, the National MSME Survival Fund and the Guaranteed Off-take Stimulus Schemes under the Nigeria Economic Sustainability Plan, the Minister of State for Industry, Trade and Investment, Mrs. Mariam Katagum, said the schemes would impact positively on businesses.

The committee, which is chaired by the Vice President, Prof. Yemi Osinbajo, comprises several ministers and the Group Managing Director of the Nigerian National Petroleum Corporation as well as the Governor of the Central Bank of Nigeria.

In her address at the briefing almost six months after, Katagum stated that in keeping to its promise to support businesses overcome the challenges posed by the COVID-19 pandemic, the Federal Government was set to commence nationwide implementation of the two MSME initiatives.

The minister said the N60bn MSME Survival Fund and the Payroll Support schemes would be rolled out first, adding that the N15bn Guaranteed Off-take Scheme would then follow.

The Special Assistant to the President on MSMEs in the Office of the Vice President, Tola Johnson, explained that the survival fund was a conditional grant to support vulnerable MSMEs in meeting their payroll obligations and safeguard jobs from the shock of the COVID-19 pandemic.

He said the scheme was estimated to save about 1.3 million jobs across the country, while targeting an average of 35,000 individuals per state. He urged interested MSMEs to visit the trade and investment ministry or the websites for the schemes to learn more about the initiatives.

He noted that the nation’s economic recovery from the COVID-19 crisis hinges on the survival of SMEs, which employs a large fraction of the region’s workforce.

“The Federal Government is responding with economic stimulus packages, including liquidity to prop up demand for SMEs”, he said.