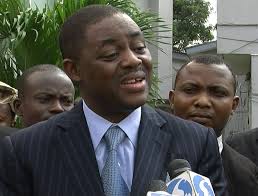 Justice Rita Ofile-Ajumogobia adjourned for judgment after parties in the suit adopted their final written addresses.

She also granted Fani-Kayode’s prayer to substitute one of his sureties, Wale Ajisebutu with one Ogbor Elliot, following Ajisebutu’s request to withdraw his suretiship for the accused.

At the resumed hearing on Monday, counsel to Fani-Kayode led by Ifedayo Adedipe (SAN) urged the court to dismiss the two- count charge against the accused as well as discharge and acquit him.

Adedipe told the court that the defense relied and adopted its final written address filed April 7, and its reply on point of law to the prosecution’s written address, dated April 27.

He argued that the prosecution’s submission in the case were misplaced and misguided, accusing the EFCC of trying to show to the world that they have a “big fish” but “there’s no fish here.”

According to Fani-Kayode’s lawyers, the prosecution has failed woefully to prove that the accused received the alleged N1 million, adding that no witness was brought by the EFCC to substantiate its claim.