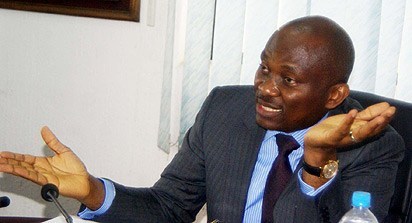 Members of the minority parties in the House of Representatives have faulted the suspension of the Minority Leader, Hon. Ndudi Elumelu, and five other leaders of the caucus by the Peoples Democratic Party.
The lawmakers said the PDP should have instead held the members who endorsed Elumelu and three others as minority principal officers responsible for the loss of the party’s nominees.
The PDP had nominated Mr Kingsley Chinda as Minority Leader; and three others as Deputy Minority Leader, Minority Whip and Deputy Minority Whip and sent the list to the Speaker, Mr Femi Gbajabiamila.
The Speaker however read a letter from a group of minority lawmakers, consisting of members of the PDP and other minority parties who claimed to number 111, at the plenary last Tuesday, nominating Elumelu as Minority Leader, Toby Okechukwu as Deputy Minority Leader, Gideon Gwani as Minority Whip and Adesegun Adekoya as Deputy Minority Whip.
The PDP had invited Elumelu and five other leaders of his faction to a meeting at the weekend but the lawmakers had called for a rescheduling of the meeting, telling the party that they were out of Abuja.
The party had suspended the Minority Leader and the five lawmakers for one month.
Addressing journalists in Abuja on Monday, 25 of the pro-Elumelu lawmakers called for a rescission of the suspension, while passing a vote of confidence on Gbajabiamila.
A PDP lawmaker from Cross River State, Hon. Ochiglegor Idagbo, who spoke on their behalf, cited Order 7 Rule 8 of the House Standing Rules as deriving its strength from Section 60 of the Constitution and stating that, “Members of the minority parties in the House shall nominate from among them, the Minority Leader, Minority Whip, Deputy Minority Leader and Deputy Minority Whip.”
Idagbo stated that the rule was adhered to in the nomination of Elumelu and other as minority principal officers.
“The Speaker of the House, Rt. Hon. Femi Gbajabiamila has communicated the resolution by majority members of the minority caucus on July 2, 2019, and he went ahead in accordance with our rules to read same on the floor on July 3, 2019.
“That said, we would like to also state that the parliament, since 1999 till date, has remained an independent body that has not been coerced into accepting any leadership imposed on it by external influence, not in line with the wishes of the majority of its members.
“We would like to appeal to our party Chairman (Uche Secondus), the National Working Committee of our great party, the Board of Trustees of our party and the National Executive Council of our party, who we know are seasoned and experienced politicians that understand these dynamics, to rescind their earlier decision to suspend our leaders and some of our colleagues, who through no fault of theirs were nominated and elected by majority of members of the minority parties.
“If an offence had been committed in this process, the perpetrators should be all 111 of us who nominated our colleagues to serve in that leadership position, not the seven members suspended by our great party.
“Finally, we use this opportunity to sue for peace and to state that we are available for further discussions with our party, the NWC, the party Chairman, the NEC of our great party and the BoT on a way to resolve these issues and to move our party forward. We also use this opportunity to call on well-meaning party leaders, particularly those with legislative experience, to intervene on our behalf in order for this matter to be laid to rest so as not to affect the fortunes of our party in the future.”
Igbagbo, while answering questions from journalists, said he would make available the list of the 111 lawmakers who supported Elumelu. He said that he never did.