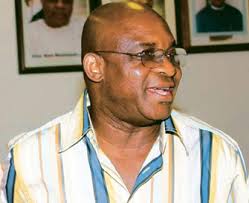 He said he would rather remain a member of the Peoples Democratic Party to restructure the party in readiness for the 2019 general elections.

There were speculations that ahead of the June 6 inauguration of the 8th session of the National Assembly, the Senate President, who has occupied the position on PDP ticket since 2007, would dump the party for the APC to enable him continue in office.

Mark has been in the Senate since 1999 but became its president in June 2007. He won his re-election bid in the March 28 National Assembly elections to represent Benue South Senatorial District.

But the Senate President said no member of the APC had spoken to him about decamping, vowing that he would remain in PDP to restructure the party because it made him what he is today.

“Before I go and sit down I have heard by way of rumour to start with in social media that I am decamping to APC. Social media is awash with that. If I will be the last man standing I will remain in PDP.

“The rumour is just an unnecessary fabrication and I even heard that one of the papers yesterday had it as headline. The media men must please make sure they investigate cases before they begin to publish it.

“Nobody has spoken to me from APC. I have no reasons whatsoever to leave PDP, no reasons. I have risen to where I am on the platform of PDP. PDP has a manifesto and I believe in it.”

Mark, a retired brigadier general of the Nigerian Army, described those who are leaving the PDP since the victory of the APC in the presidential election as “fair weather friends of PDP.

“Those who are leaving PDP now are fair weather friends of PDP. So they have gone (and) they have no problem. When PDP bounces back in few years in the next couple of elections or next election they will come back again to PDP. So they will move. Those ones are not really the issues.

Earlier, the Senate Leader, Victor Ndoma-Egba, eulogised Mark for the wisdom he employed in piloting the affairs of the Senate and the National Assembly.

He said the Senate President’s contributions to the socio-economic and political development of Nigeria cannot be undermined.

Mark’s close friend and a former senator, Tunde Ogbeha, prayed God to grant the Senate President good health, long life and courage in the years ahead.

Also, the Clerk to the National Assembly, Salisu Maikasuwa, praised the Senate President for his resourceful leadership and harmonious working relationship between the management and the political leadership.

In his homily, the Parish Priest of St. Mulumba Catholic Chaplaincy, Innocent Jooji, a Reverend Father noted that only God determines the destiny of all human pointing out that “Whatever the future holds for each and every one of us is determined by God, ” we should continue to have faith in God.”