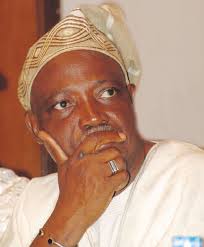 The All Progressives Congress (APC) has said that former governor of Oyo State and the defeated candidate of the Accord Party (AP) in the last governorship election in the state, Senator Rashidi Ladoja, is anti-democratic.
The party claimed that Ladoja did not have respect for the wishes of the people of Oyo.

The party also described Ladoja as an avowed anti-democrat “whose penchant for placing personal interests above that of the society could not be rivaled.”
Ladoja garnered 254,520 votes to emerge second behind the incumbent governor, Abiola Ajimobi who polled 327,310 votes in the just-concluded governorship election.

The former governor has said he would not accept the final results as collated and announced by the Independent National Electoral Commission (INEC), citing some irregularities which he had promised to prove before the Election Tribunal set up in the state for the 2015 general election.
In an interview published by a national daily, Ladoja alleged that the people of Oyo were in a mourning mood over the announcement of Ajimobi as the winner of the election.

Reacting to Ladoja’s comment, the APC in Oyo State, in a statement issued by its Director of Publicity and Strategy, Olawale Sadare, stated that it was disturbing to note that the former governor would not accept the result of an election “described as one of the fairest in the history of elections in the state.”
The statement said in part, “It is apparent that those who fooled Ladoja that they saw him sitting on Ajimobi’s seat at the Agodi Government House are the ones who make him arrogant and disdainful of the people and the wishes of the people. He should wake up from the world of the spirit and see the reality that Ajimobi has effectively retired him from the politics of Oyo State.

“Describing the mood of the people as mournful after Ajimobi secured a vital victory for the continuity of good governance as against the impunity, reign of terror and nepotism which marred the administration by the same Ladoja is the height of disrespect for the people of Oyo State. It is also tantamount to declaring war against democracy and the society, having once benefitted from same democratic system even though in a questionable circumstance.”
The APC added that Ajimobi’s success at the poll was legitimate.
It criticised Ladoja of exhibiting disdain for the larger society.