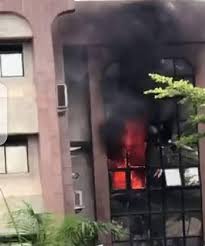 A part of the Nigerian Postal Service headquarters in Abuja was on Wednesday gutted by fire, the fifth fire incident in six months at key Federal Government offices.

However, the Federal Capital Territory Fire Service personnel was able to contain the fire.

The incident attracted a large crowd at the busy Garki 2 in the Nigerian capital.

A security officer who pleaded anonymity, told NAN that the fire started at about 8:40 a.m.

On April 17, a part of the Independent National Electoral Commission (INEC) went up in flames.

Nine days earlier, some offices at the Accountant General’s office was burnt.

Just two days before, there was a similar outbreak at the Corporate Affairs Commission (CAC).

All incidents occurred in Abuja, Nigeria’s capital. But the government has not made any serious attempt to probe the causes.