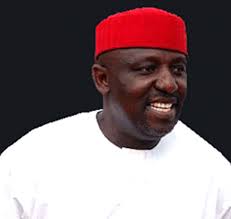 The March 28 victory of the All Progressives Congress (APC) in the presidential election has tipped the balance for the governorship election in favour of incumbent Governor RochasOkorocha. Though the Peoples Democratic Party (PDP) in the state is still upbeat about Saturday’s elections, however the rate at which political heavyweights in Imo are switching to APC has put the PDP in a tight situation. ORI MARTINS reports

The political calculus in respect to the April 11 governorship election in Imo state was evidently against incumbent Governor RochasOkorocha of the All Progressives Congress (APC), until Gen MuhammaduBuhari (retd) was announced winner of the March 28 presidential election. Since then, it does appear that Okorochawhose fate was hanging in the balance has bounced back to reckoning in the governorship race. What is more, Buhari has equally visited Imo state to thank the people for their support and prayers although political commentators are quick to point out that he came on a campaign trip for the APC governorship candidate, Okorocha.
Just few days after Buhari emerged President-elect, some prominent politicians in the state who were of PDP suddenly made a U-turn and defected to APC. For instance, Chief Jerry Chukwueke who was the PDP Chairman of Contact and Mobilization Committee decamped to APC. He said while decamping that he did not move over to APC because of Okorocha, but because of the fact that it is not good for Imo state to be in opposition to the party at the centre.
Following Chukwueke’smove is another popular politician in the state who was former ANPP chairman in the state, Chief VitalisAjumbe. He has declared for APC. Ajumbe in his declaration speech called on all Imo voters to cast their votes for APC in the Saturday’s elections. Other big wigs who have decamped to APC in Imo include Bethel Nzimako, CharlvonAmadiNkemNwankwo and CDB Williams. Based on a recent meeting between Senator IfeanyiArarume, Chief IkediOhakim and Okorocha at the government house, Owerri, indications are strong that the two big politicians from Okigwe zone may soon join the APC. Already Ohakim’s supporters like former Commissioner for Information, Peter Okpaleke have moved to APC heightening speculation that the former governor may soon cross over.
The calculation of Ohakim and Ararume is that it is better to support Okorocha to get a second tenure and then hand over to Okigwe zone in 2019, than to give their support to EmekaIhedioha who may rule for eight years by which time both of them might not be politically relevant anymore.
As if things are going the Okorocha way, a last minute effort to convince all the other Owerri zone governorship candidates to step down for Ihedioha hit the brick wall. Ken Ojiri of Accord Party, Captain Emmanuel Iheanacho of APGA and Osmond Ukanacho of UPP all refused to step down, insisting that it was too late for such plan after they had spent so much resources, energy and time in the governorship campaign.

Also, another factor working for Okorocha is the Orlu issue. The Orlu zone in Imo state has 12 LGAs as against Owerri zone with nine LGAs and Okigwe’s six. To this effect, an average Orlu voter may still vote for his ‘brother’ not minding the party he belongs as the slogan in Orlu now is ‘Okorochabunwanneanyi’, meaning that Okorocha is our brother.
Explaining the present stand of the parties and their candidates’ chances in Imo state in the Saturday’s governorship election, the SSA to the Governor on Media, Mr. Sam Onwuemeodo said; “The indication is very clear. Power has shifted in Abuja. The APC and Buhari have ended PDP’s 16 years of impunity. Here in Imo state, the people will not afford to ignore the momentum. The wave that brought about the Abuja change was also preached here by Governor Okorocha and so, he will be re-elected on April 11”.
On the other hand, the PDP says despite the loss of the presidency to APC’s Buhari, the party is still strong. The EmekaIhedioha Campaign Organization spokesperson, Chief EnyinnayaOnuegbu noted that “We are all aware that Imo state is a PDP zone and it was demonstrated on March 28, 2015 Presidential and National Assembly elections when the PDP won 11 out of the 13 federal seats and voted massively for President Goodluck Jonathan. By this Saturday, we shall again demonstrate the fact that we are a PDP state by voting out Governor Okorocha and voting in EmekaIhedioha”.
Onuegbu added; “We now hear them saying that it is not good for us to be in the opposition. But they quickly forget that Okorocha has been in the opposition since 2011, even as the late Sam Mbakwe who did marvelously was in defunct NPP an opposition party to the NPN at the centre. Who even said that the PDP will not bounce back?
Just as some PDP members have gone to APC, there are also some APGA members who have defected to PDP en mass and thereby supporting the candidature of Ihedioha. After losing the National Assembly election, Hon Dan Ikpeazu of Owerrifederal constituency took his thousands of supporters to PDP to declare their support for Ihedioha. There are other heavyweights in Imo PDP who are behind Ihedioha. They include former governor AchikeUdenwa, Arthur Nzeribe from Orlu zone; Emmanuel Iwuanyanwu, KemaChikwe from Owerri zone and Tony Chukwu from Okigwe zone.
As the Deputy Speaker of the House of Representatives, Ihedioha has so much contacts and connection to prosecute his governorship ambition to a logical conclusion. He was a foundation member of the PDP and has been in the Green Chamber since 2003. Therefore, his emergence as the party’s governorship candidate did not come as a surprise to many watchers. This is so because the member representing AbohMbaise/ NgorOpkala federal constituency in the National Assembly has, within this period made his contacts and resourcefully mobilized all the interest groups for his ambition.
The media director ofIhediohaCampaign Organization, Onuegbuhas declared that Okorocha’s time is up. He said that Okorocha cannot point to any major completed project he has delivered to the people since he assumed office in the state in 2011. “There are no completed projects in Imo today except for few of the Arabian roundabouts which have defaced the Imo state capital.

On how he will boost the economy of the state, Ihedioha promised to create over 5, 000 jobs for youths when he takes over as governor by May 29, 2015. The Deputy Speaker also vowed to restore the 10,000 jobs provided by former governorOhakim. Ihedioha revealed that he would create the jobs by ensuring that 15 youths from each political ward in the state would be given jobs with which could take care of their families as well immediate needs.
Explaining what will be the administrative thrust of Ihedioha if he is elected governor, the Director General of his campaign organization, Chief Chris Okelonu said; “Our vision is to build a transparent, responsive and sustainable government that will promote human capital development, ensure the provision of infrastructure, security of lives and properties and improve access to investment opportunities and lifesaving services now and for future generations of our people”.
He added; “Ihedioha’s administration will shape and sustain a peaceful, prosperous, just and democratic world and foster conditions for stability and progress for the benefit of the Imo people everywhere.
The Imo governorship contest from all evidences can go either way, however Okorocha given his popularity and perceived achievements coupled with the APC victory at the presidential election stands a good chance of winning the race.