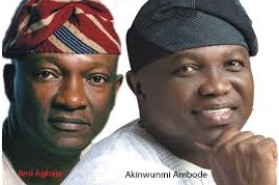 The governorship election which will hold this Saturday, April 11 willturn out to be an historic showdown between the governing AllProgressives Congress (APC) battling to retain the governorship seatand its strongest opponent, the Peoples Democratic Party (PDP) thatwants to wrestle power from the APC.

The two political parties have been engaging in series of campaignsand consultations to ensure that they win the election which politicalobservers believe would be the battle for survival for the APC, sinceit has been on the saddle of leadership in Lagos in the past 16 years.

Investigations revealed that this particular contest promises to be afierce one in view of the widespread clamour for change in theleadership of the centre of excellence state. To many Lagos residents,the change which swept off incumbent President Goodluck Jonathan andthe PDP should be experienced in Lagos.

What actually heightened the anxiety in the state over thegovernorship poll was the performance of the PDP in the presidentialand National Assembly polls in the state which the PDP narrowly lost.

It was further argued that the National Assembly election held on thesame day as the presidential election rattled the APC because of thefour House of Representative seats which PDP won as against theprevious elections in which the ACN would snatch all the availableslots.

As at yesterday, fresh lobbying were said to be going on with opinionleaders, power brokers and those who could make either of the partiesto emerge the winner. It was further argued that the APC has now beenboxed into a tight corner, in view of the recent inflammatorystatement credited to the Oba of Lagos, Oba RilwanAkiolu, about theIgbo community in Lagos.

This statement Hallmark learnt has put the party in serious pressureand to return to the drawing board to re-strategize on how to win theIgbo votes. The Igbo are now being wooed by the political parties.Right now, it is fight to the finish between PDP and APC.

The areas where PDP would draw its strength from as seen in thePresidential election are where there are a large number of Igbo andSouth-South people. There are strong sympathy for the PDP among theelectorates as most of them vowed not to cast their vote for the APC,perceiving PDP as the party through which their interest can beprotected in the state. This sympathy feeling for the PDP by these setof voters in the areas would also affect the governorship election inthe state in favour of PDP candidate in the state, Mr. Jimi Agbaje.

They think their interest would be better served in PDP leadership inthe state.

Agbaje may also enjoy some protest votes from those who are aggrievedby the way APC has been running the affairs of the state in the past16years, under the firm control of the godfather, Bola Tinubu.

It is believed that there may be considerations for the APCgovernorship candidate, AkinwunmiAmbode than the PDP governorshipcandidate, Agbaje, because of the strong political structure of theAPC in Ikorodu, Somolu, Epe and its environs, majorly Lagos easternpart.

This scenario has now made both of them to be jittery since they nowshare equal strength and are not sure where the pendulum would swingon Saturday.

The Coordinator of Buhari/Oshinbajo Campaign in Lagos, Hon JamesFaleke, who also won his re-election to the House of Representativesin the March 28, election said that the APC is fully prepared for theSaturday election and that nothing would stop the party from winningthe election.

He said that the APC is aware of the propaganda and campaign ofcalumny against its leader and the party, but expressed confidencethat the propaganda of the PDP has failed and would not help the partyto wrestle power from APC a winning party. He added that they havemobilized enough for the election and are battle ready to face the PDPwhich has been going about with empty threats.

When contacted the Chairman of PDP in Alimosho local government andwho is one of the coordinators of Agbaje campaign organization inLagos, Prince AyodeleAdelaja said people of Lagos are now ready forPDP to take over, adding that the dominance of one man in Lagospolitics would end on Saturday after the people of Lagos would havespoken. He said the PDP has already intensified its effort that wouldmake it win the governorship election, irrespective of the antics andthe rigging plans of the APC.

Meanwhile, both Agbaje and Ambode have called on the people of thestate to come out in large numbers to vote for the candidate of theirchoice, and to ignore insinuations concerning the election. Both ofthem are however confident that the election would go in their favouras they conclude campaigns today.