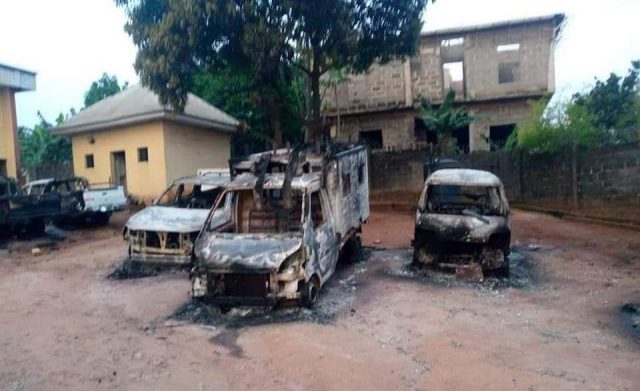 The gunmen set ablaze the office building of the local government, a magistrate court and the office of Enugu Electricity Distribution Company (EED).

Gunmen suspected to be sympathetic to the separatist agitation in the southeast, have continued to attack government facilities in the region, particularly in Anambra and Imo states.

On Saturday, the Anambra State governor, Charles Soludo, visited Nnamdi Kanu, leaders of the Indigenous People of Biafra (IPOB) in Abuja with a view to finding solutions to the crisis.

Soludo said, Kanu who being detained by the federal government and is currently facing trial for alleged treason and terrorism, expressed sadness over the attacks and killings.

It is understood that the agitators have broken into faction, with a certain Simon Ekpa, a Finnish based former disciple of Kanu leading another group.

Mr. Ekpa has been been mocking Soludo’s visit to Kanu, alleging in a video broadcast that the Anambra governor visited a cloned version of Kanu.

He is also known to back certain violent activities by separatist agitators in the southeast.

According to him the arsonists attacked the council’s headquarters about 2 a.m. today.

Ikenga said combined response by security operatives and the natives helped to repel the criminals.

“As we speak, security operatives are still over the incident, and we have put the place under control.

“I must add that the natives were helpful to contend with the attack as some of them joined security operatives to repel the attackers,” Ikenga said.

A source, however, told NAN that the arsonists attacked Idemili North Local Government Area headquarters burning down buildings within the complex.

The source said the Magistrate’s Court building and office of the Enugu Electricity Distribution Company EEDC, within the complex were also affected by the inferno.

He also said that operational vehicles parked in the premises were destroyed.

He said no human casualty was recorded during the attack.

Ikenga further said enough security personnel were drafted to the area as well as fire fighters who quickly put out the fire and restored normalcy in the area.