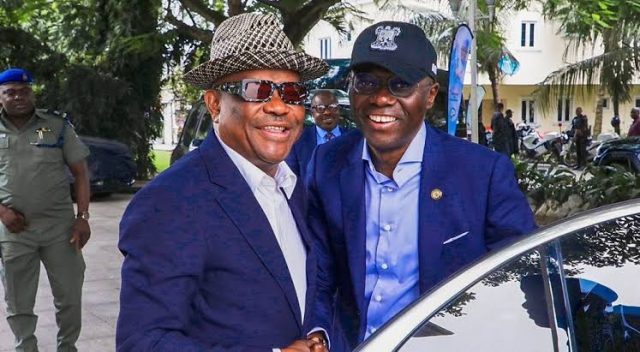 The endorsement comes despite Wike’s party, the Peoples Democratic Party (PDP), having a governorship candidate in Lagos, in the person of Olajide Adediran, popularly known as Jandor.

Wike gave the endorsement on Tuesday at a conference organised by the wives of Lagos state officials, held at the Eko Hotel and Suites, Victoria Island, Lagos.

Speaking at the conference, the Rivers State governor said his presence at the event was because Sanwo-Olu is “doing well” for the people of the state.

“If Sanwo-Olu is not doing well, even if he belongs to my party, I won’t come. So, for me, if you are in my party and you are not doing well, you won’t see me,” Wike said.

“If you are not in my party and you are doing well, you will see me and that is what I stand for. And I will not regret to say that I’m in support of you.”

Sanwo-Olu is currently seeking re-election as governor of Lagos on the platform of the All Progressives Congress (APC), while Wike, a member of the Peoples Democratic Party (PDP), will complete his second term in office in 2023.

At the conference, Wike announced the donation of N300 million to the committee of wives of Lagos State officials.

The Rivers governor said he is impressed by the projects executed by the committee, adding that he will replicate the “lessons” learnt from the women, in Rivers.

“We support this so that you can continue with your laudable projects with the sum of N300 million,” Wike said.