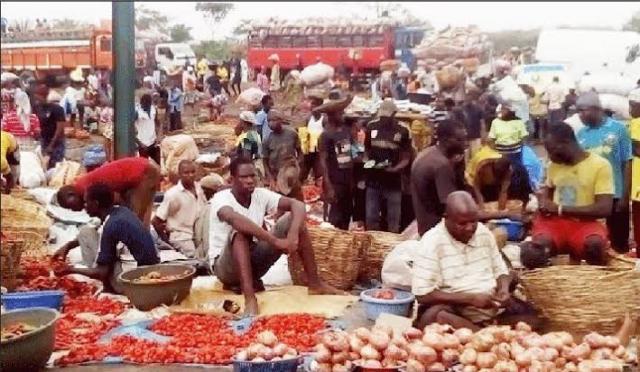 The continued disruption of farming activities, according to BH findings, has negatively affected the agricultural sector. This is confirmed by data mined from the website of the National Bureau of Statistics (NBS).

The rise in food inflation was attributed to increases recorded in the prices of bread and cereals, potatoes, yam and other tubers, meat, fruits, vegetable, fish, and oils and fats.

A global humanitarian organisation funded by the British Department for International Development (DFID), Mercy Corps, in a recent report, noted that Nigeria lost over $14 billion in potential revenues yearly to the raging herdsmen-farmers conflict, meaning the country have lost over $84 billion between 2015 and 2020 to the conflict.

Also, the Food and Agricultural Organisation (FAO) had listed Nigeria among 27 countries that are on the frontline of an impending food crisis in 2021.

Checks revealed that apart from internal displacement of people, economic activities, particularly farming is almost crippled in the states. Those who spoke on the development blamed the current food scarcity and inflation in the country on the destruction of farmlands by rampaging militias and bandits.

“I am a security guard, and at the same time a farmer from Sokoto State – likewise my brother, Subair. While one of us stays here in Lagos for three months to guard our bosss house, the other is in Sokoto to farm.

“We used to reverse roles every three months. When I am in Lagos, he will be in Sokoto, and while I am in Sokoto, he will be in Lagos. Unfortunately, due to incessant bandits attacks and the fear for our lives, we have not travelled to Sokoto in the last six months.

“The crops we planted in August (2020) which are due for harvesting are rotting away in the farms. We dare not go there for the fear of being ambushed and killed or kidnapped for ransom. The people we pay to oversee the farm for us are not honest. They just collect money but avoid the farm like plague.

Foodstuffs prices should be coming down at this period as we are in dry season harvest period. But most farmers could not go to the farms to harvest planted crops, leading to millions of tonnes of produce been destroyed by the fierce dry season heat.

“Several of those who braved the odds didnt come back as they were slaughtered by either Book Haram insurgents, rampaging herdsmen or bandits who daily roam the areas for spoils of war”, Ahmed lamented.

Ahmed also revealed that farmers should be in the bush now preparing for the rainy season farming.

“But that is not the case. From Sokoto, to Zamfara, Kaduna, Kogi, Adamawa, Bauchi and other states, millions of hectares of farmlands are lying fallow and unproductive. If we do not prepare for the next planting season due to insecurity now, how would people eat”, Ahmed added.

A Hausa leader and businessman in the Fagba area of Lagos State, Alhaji Inusa Yaro, said the current food crisis would worsen if the government failed to address the situation.

“I am a farmer and at the same time a transporter. I am supposed to be in Kebbi now harvesting dry season (irrigated) crops and preparing for the new farming season. But I have been in Lagos since 2020 because I did not want to die. I don’t even go home again for social functions. What I do is to send money. The roads nowadays are treacherous. Bandits are everywhere.

Several people I know who had the courage to go up north for farming or business have been killed or injured in the process.

“Farmers are particularly affected because they are stationery targets. Bandits wait for them in their farms knowing they would surely come. Their crops are eventually looted if no one is around to cater to them”, he said.

Alhaji Inusa Yaro, who is also a transporter with over 10 fleet of trailer, disclosed that he and many other fellow transporters have abandoned treacherous routes for now in an attempt to protect their men and investments.

“Trailer drivers have abandoned treacherous roads due to incessant kidnappings and killings of their members. The few dare-devils that agree to do business charge exorbitant fees.

“Apart from bandits, security men manning the roads are also our headaches. You won’t believe that a trailer coming from Yola to Lagos sometimes pay close to or more than N100,000 in extortion money.
“At some checkpoints, particularly those in the South West, they pay as much as N2,000. But in the North, apart from the hotspots like Kaduna, Yola and Maiduguri, they pay between N500 and N1,000. And we can meet up to 100 checkpoints, not to talk of area boys who collect ‘development’ levies.

“You can do the arithmetic yourself. It is quite revealing. You won’t know if you are in the business. That is why farm products are very expensive in the South.

“Apart from cattle and fishes, I doubt if agricultural goods that filled up a trailer amount to N500,000. So what Nigerians are paying for is haulage cost and not the actual value of the products.

“Due to the inability of most farmers and traders to afford the high transport charges, a large portion of farm products are trapped in the farms, rotting away or looted by hungry bandits”, declared Alhaji Yaro.
While farmers in the North daily face attacks from Boko Haram insurgents, bandits and kidnappers, attacks on farming communities in the Southern part of the country by Fulani herders have risen, with many displaced and farm crops running into several billions of naira destroyed.

For instance, Fulani herdsmen last week destroyed a multi-million maize farm in Ekiti State belonging to members of the Maize Growers Processing Marketer Association of Nigeria (MAGPAMAN). The farm covering about 235 hectares of land is inside the state forest reserve in Aduloju farm stead located along Ado-Ijan road in Ado Local Government Area of the state.

Our Correspondent learnt that the herders had invaded the farm in the dead of the night with dangerous weapons, chased away ground-men manning the farm and proceeded to feed their cows unchallenged.
The Secretary of MAGPAMAN, Ekiti State chapter, Mr. Tope Emmanuel, disclosed that the herders had been terrorising the farmers in the last one week leading to the destruction of the maize farm.

Last year, we approached the CBN as a group to obtain loan worth N6.6 million for the maize farm and we planted the maize covering 235 hectares of land of the farm.

But unfortunately, the herdsmen came and destroyed everything in the farm with nothing for us again. Those herders always go there during the night with dangerous weapons in the last few days and nobody can challenge them because of the arms they are holding. We cant go to the farm now.

Dont forget that government always say we should go to farm and we approach bank for loan hoping to pay back after cultivation but nothing to cultivate now as these herders have destroyed everything in the farm.

We are begging the state government to save us as members are really in difficult situation now in view of the loan and you can predict what might follow if nothing is done, the MAGPAMAN scribe warned.
The gale of destructions is not limited to Ekiti State, but witnessed in other Southern states of Ebonyi, Delta, Edo, Ogun, Ondo and Osun. With the only state spared been Lagos, owing largely to its fully urbanized state and non-availability of farmlands.

The attacks were more pronounced in Ondo, Ogun and Oyo where the situation recently snowballed into a major crisis. The Oke-Ogun people of Oyo State had cried out for help from government on several occasions without success, until a Yoruba freedom fighter, Sunday Adeyemo, popularly called Igboho, led a force to Igangan to liberate the people from the hands of Fulani invaders.

Before the liberation expedition, several lives have been lost and hectares of crop farms destroyed by the invaders. For instance, an American returnee and prominent farmer, Dr. Fatai Aborode, was in December 2020, butchered on his farm along Apodun village, Igangan by four herdsmen.

According to security sources, the late Aborode, alongside his manager, Bolanle Olanrewaju, was waylaid on their way home on a motorcycle after he visited the Seriki Fulani of Igangan, Seriki Saliu, to report the destruction of crops on his farm running into millions of naira by Fulani herdsmen.
Aborode’s murder, however, did not go without consequences, as Sunday Igbogho and his supporters used the opportunity to chase ‘Fulani invaders’ out of Igangan. Despite Igboho’s intervention, there have been increased cases of attacks on farmers and their farms by vengeful herders.

The situation is not different in Ogun and Osun, with soldiers even captured on video accompanying herdsmen to Ogun communities to beat up monarchs, chiefs and villagers who chased them from their domains.

Owing to constant harassment from bandits, herdsmen and their facilities in government, most farmers have refused to go to farms for fear of being ambushed.
While the attacks are allowed to fester, farming activities are suffering, with experts warning that the country stands the risk of plunging into a major food crisis as well as huge financial losses.

An agriculture expert, Dr. Gbenga Alabi, said the nation lost over N5trillion in 2020 alone to the disruption in farming activities.
The current high cost of poultry products, particularly eggs, is due to the scarcity of maize, an essential feedstock in poultry food production. At the beginning of last year, a ton of maize sold for between N75,000 and N80,000. By the end of 2020, it was over N200,000 per tonne. The price has crashed a bit due to the ongoing harvest season, Alabi said.

Corroborating Alabi, the Chairman, Poultry Association of Nigeria (PAN), Ogun State chapter, Mrs. Blessing Alawode, informed BH that millions of jobs have been lost in the industry and appealed for the quick intervention of the Federal Government.
Poultry industry, estimated at N10 trillion is the most capitalised in the agric sector. Such an industry employing about 20 millions directly and indirectly through its wide value chain must not be allowed to completely collapse.

With the current astronomical prices of soya beans and maize, more poultry farmers with thousands of their workers across the country may soon be out of business as majority of Nigerians cannot afford the inevitable but exorbitant cost of poultry products.

Over two millions of direct and indirect poultry farm jobs have been lost and many firms have closed down in the last five months as a result of acute shortage of maize and rising price of soya beans, Alawode said.

Also speaking, the National President of All Farmers Association of Nigeria (AFAN), Ibrahim Kabiru, said there would be a food crisis this year.

“Food prices are already skyrocketing and they will further surge but we must address the issue of insecurity and banditry to avert this impending food crisis in 2021.