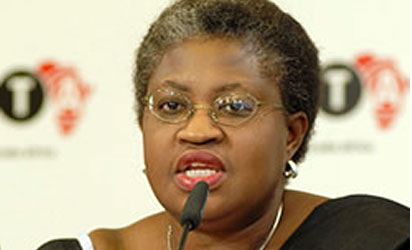 Minister of Finance, Dr Ngozi Okonjo-Iweala, has said that N145.2 billion had been set aside for payment of subsidy on petroleum products in the 2015 budget.

Okonjo-Iweala said this yesterday in Abuja while addressing newsmen on the changes made in the 2015 budget recently passed by the National Assembly.

She said that N100 billion was set aside for subsidy on Premium Motor Spirit (PMS) while N45.2 billion for kerosene.

“I want to clarify some of the information in the media that the National Assembly passed the budget without the subsidy. This is not true.

“This generated an extra revenue of N54 billion for the Federal Government; they retained the production volume of 2.2782 million barrels per day and exchange rate of N190 to a dollar,” she said.

This, she said, was because the interbank rate was at N197, adding that the Central Bank had advised that the exchange rate should be used.

She said the gross federally collectible revenue for the federation increased by N169.845 billion, from N9.61trillion to N9.78 trillion.

She said this was due to increase in the benchmark price by a dollar.