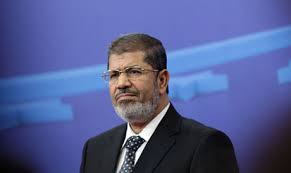 An Egyptian court has sentenced former President Mohammed Morsi to 20 years imprisonment for ordering the arrest and torture of protesters during his rule. Mr. Morsi faces other trials. The verdict, on Tuesday, is the first he has received since he was ousted by the Armed Forces in July 2013, following mass protests against his rule. Protests against his rule began building less than a year in power, after he had issued a decree granting himself far-reaching powers. However, the deposed President and 14 other Muslim Brotherhood leaders escaped a more serious charge of inciting the killing of protesters, which could have carried the death penalty. Most of the other defendants were also given 20-year prison sentences. After Mr. Morsi’s removal, the authorities banned his Muslim Brotherhood movement and arrested thousands of his supporters.

Mr. Morsi’s legal team have said they will appeal the ruling. Hearing the verdict, Mr. Morsi and the other defendants gave a four-fingered salute, a symbol of the deadly clearance of Brotherhood supporters at the Rabaah al-Adawiya mosque in 2013. The ruling is a “travesty of justice. They want to pass a life sentence for democracy in Egypt,” a senior Brotherhood figure, Amr Darrag, said. Meanwhile, on Monday, a court sentenced 22 Muslim Brotherhood supporters to death for an attack on a police station in Cairo, part of an ongoing crackdown against the Islamist movement.

Other charges of separate trials being faced by Mr. Morsi include, alleged collusion with foreign militants in a plot to free Islamists in mass prison breaks during the 2011 uprising against Hosni Mubarak; and alleged espionage and conspiracy to commit terrorist acts in Egypt with the Palestinian movement Hamas, Lebanon’s Hezbollah and Iran’s Revolutionary Guards. Another one is the allegation of endangering national security by leaking state secrets and sensitive documents to Qatar via the Doha-based Al Jazeera network.