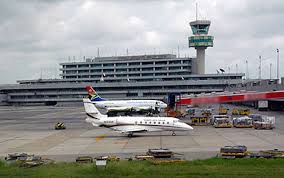 Domestic flights across the country were grounded for over six hours
on Thursday as a result of the industrial action embarked upon by Air
Traffic Controllers in Nigeria.
Thousands of passengers were left stranded at various airports in
Nigeria during the period that the strike lasted.
Sources at the Nnamdi Azikiwe International Airport, Abuja, disclosed
that the strike was due to a lingering crisis between the controllers
and their management.
A senior official at the NAIA, who spoke on condition of anonymity,
said, “The Air Traffic Controllers are agitating for the payment of
certain amount of money which was meant to be paid by their management
since last year.
“But this money has not been paid despite several pleas and threats.
So they want to use this opportunity to let everyone know and if
possible knock out the management.
“It is clear that the strike is to force their management to pay them
and to also make the government aware of what is happening in their
organisation. Since morning, flights have been disrupted all over
Nigeria, except international flights.
“The strike is not against the Federal Government but is as a result
of an internal issue between the controllers and their management.
They want to use this opportunity to push their management to meet
their demands.”
Efforts to get the reaction of the umbrella association of the
controllers, the Air Transport Services Senior Staff Association of
Nigeria, were not successful.
The President, ATSSSAN, Mr. Benjamin Okewu, did not pick calls to his
phone lines.
He had yet to respond to a text message sent to him by our
correspondent up till the time of filing this report.
Meanwhile, the aviation authorities at the airports had yet to react
to the development as of the time of filing this report.