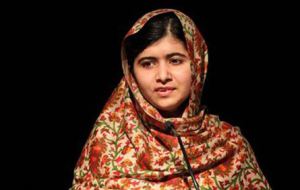 Malala Yousafzai is a Pakistani activist for female education and the youngest-ever Nobel Prize laureate.

On the afternoon of 9 October 2012, Yousafzai boarded her school bus in the northwest Pakistani district of Swat. A gunman asked for her by name, then pointed a pistol at her and fired three shots. One bullet hit the left side of Yousafzai’s forehead, travelled under her skin through the length of her face, and then went into her shoulder.

In the days immediately following the attack, she remained unconscious and in critical condition, but later her condition improved enough for her to be sent to the Queen Elizabeth Hospital in Birmingham, England, for intensive rehabilitation.