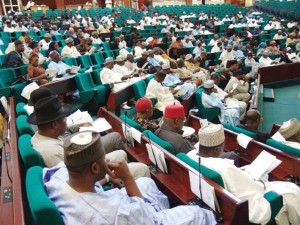 The attempt by the Senate to over rider the veto of President Goodluck Jonathan to the Fourth Alteration of the 1999 Constitution suffered a setback yesterday.

Although the first reading of the Bill on “Constitution of the Federal Republic of Nigeria (Fourth Alteration) Act 2015” was listed on the Senate Order Paper, the planned first reading could not hold.

The item listed as first Business of the day had Deputy Senate President, Ike Ekweremadu and 46 others as sponsors.

Ekweremadu is Chairman, Senate ad hoc committee on review of the 1999 Constitution (as amended).

Without offering any explanation, Senate Leader, Victor Ndoma-Egba, moved a motion that the first reading of the controversial Constitution amendment Bill be deferred to another legislative day.

The first reading of the Bill which had been passed by the two chambers of the National Assembly would have marked the beginning of the process to over ride the President’s veto by the upper chamber.

The National Assembly had, on Monday, gazetted the Fourth Alterations of the Constitution to pave the way to over ride President Jonathan’s veto.

It is listed as “Bill No SB 548” and contained all the alterations of the Constitution adopted and passed by the National Assembly.

Gazetting of the document is preparatory to a fresh passage of the Bill after it must have scaled first, second and third readings in line with legislative practice.

It is not clear at press time why the slated first reading of the Bill was stepped down.

While a source said the absence of Senate President, David Mark, in the chamber might have informed the action of the Senate on that matter, another source told our correspondent that “intense pressure is being mounted on the National Assembly from outside to reconsider the move to over ride Mr. President’s veto.”

The source added that “ some highly placed Nigerians have been making frantic efforts to convince the National Assembly to take a second look at the reasons Mr. President gave for withholding his assent.”