Like most other fast moving consumer goods, FMCG, companies in the country, Unilever Nigeria Plc seems to be locked in a fight for survival as the economy continues to struggle. After two leadership changes in the past few years, it appears the worse is not over as its woes persist. The once jewel of the Conglomerate sector is by all indications a walking ghost of its past.

Experts had long made the call on the sector but optimistic investors and shareholders believed that there could be a turn around. But with UACN, PZ, and Leventis tottering on the brink, it would be a matter of time before the bug bites Unilever. And it appears its day of reckoning has eventually arrived.

Its 2019 earnings scorecard disappoints analysts, shareholders and the market as its run of poor performance has no end in sight. At market cap of N86.175 billion for 5,745,005,417 shares outstanding traded at N15 on Wednesday, year to date, the company stock has lost 27.54% of its year high price.

In a surprise move, the company changed its operating model in what the management term as its choice to tighten the noose around cripplingly indebtedness to key distributors. Its non-performing receivables have been building up for quarters, and adjustment to credit terms led to massive sales decline as distributors channels logged out demand.

Sales went down, receivables were impaired and the company took strategic decision to check distribution channels, which thus reduced offerings into the market. Probably, the company stopped production as analysis of its inventories shown.

Of course, this was part of the big game but turnaround time didn’t get better either.

Of the total revenue made in 2018, more than 20% were credit sales to key distributors. A year after, Unilever tight credit policy reduced receivables as proportion of sales fell to about 18.4%. 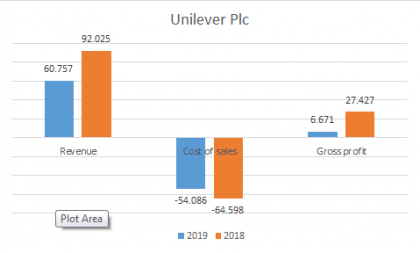 Unilever had more than N35 billion cash and cash equivalent that the management could have played with to sustain market position. However, the management failed to promote its products enough, having reduced brand and marketing expenses in 2019.

This happened about the same time when it changed credit terms for distributors, thus sending ripple effects on its demand structure and eventually on profit performance. Analysts held that this was not well-thought through strategic choices impacted its financials which resulted in a very disappointing performance.

For Fast Moving Consumers Goods (FMCG) operators, fourth quarter is usually the peak period, because of the festive season and the educational calendar. But this did not manifest in the performance of the company, thus confirming that Unilever had trouble in its supply chain. 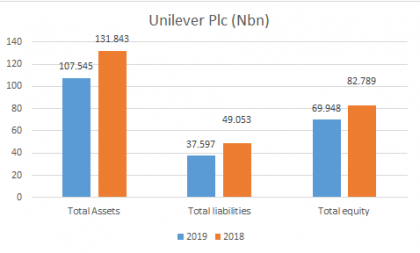 In 2018, its key distributors owed total sum of N17.739 billion. It suffices to say that the company had recorded impaired receivables assets written off. A total sum of N1.211 billion receivables was written down in 2019 as against N486 million in the corresponding period. It however realised advance and prepayment, down from N4.395 billion to N2.477 billion.

Meanwhile, its related parties are expected to pay Unilever Nigeria total sum of N6.216 billion in 2019, as against N4.307 billion in the comparable year in 2018. This is in addition to N4.213 billion the company has paid down as deposit for its imports compared to N253 million in 2018.

The company is however indebted to its short term creditors including suppliers a sum of N34.822 billion. This is against N38.6 billion owed as trade payables in 2018.

This implies that the company is not having a run on its cash flow really with short term creditors that are willing to support it. But then, this may be as agreed or the company is having trouble meeting its short term obligations.

Analysis into the company’s working capital shows that the management paid more than N3 billion to suppliers in 2019 –shown by movement in trade payables line which moved from N13.138 billion to N10.077 billion in 2019.

Its related parties’ transactions which accounted for about 40% of the payables account closed at N13.835 billion. The company had offset about N1 billion from the total sum of N14.611 billion brought forward in 2018.

Accrued freight and shipping charges was reduced to N1.471 billion as against N1.609 billion in 2018 just as N200 million payment was made from its non-trade payables of N3.465 billion.

Yaw left, but not on his own accord

There seems to be a bad succession planning at Unilever Nigeria. Yaw Nsarkoh resigned as the Chief Executive Officer late last year with Carl Cruz – a Filipino by origin- taking over the position in January 2020. The company’s Finance Director Adesola Sotande-Peters was appointed CEO in acting capacity because of alleged sudden exit of Nsarkoh. He was forced to resign, an inside source said.

In their review, analysts at FBN Quest said the resignation period coincided with the weakest quarterly earnings publication over the last decade caused by a change in the company’s operating model.

Though the company’s sales slipped, reduction in associated cost of sales was minimal. In 2018, when Unilever sold goods worth N92.025 billion, it had its inventories valued at N13.928 billion. In its recent financial report, the company sales was N60.757 billion, if this is added to its closing inventories at N11.866 billion, then you would observe low production for 2019 was deliberate.

Again, the changes in selling and distribution cost suggest that the company’s operation was not efficiently managed. For financial year 2018 when sales were upbeat, the company expended N4.234 billion on selling and distribution of its products portfolio. A year after, on N60.757 billion sales Unilever expended N3.151 billion which seems way too far above activities level.

Unilever Plc did not have problem selling its products, it has a deeper problem of getting goods to the market. Though overall revenue was not strongly supported by exports, but the pain at the home base was self-inflicted.

Although the company had problem evacuating imported inputs, such as raw materials and equipments, from the ports, decisions to adjust critical elements of its market strategy caged earnings. In 2019, few companies in FMGC would have gut to double down brand and marketing expenses but Unilever cut about 40%.

In the FMCG, loading down on brand and marketing expenditure could distort sales budget, Consultants at LSintelligence said. Looking at the inventories movement, there is possibility that the company lower production not meeting customers demand given the fact that inventories’ reduced.

The question is: “Where did Unilever get all the products from. Or how did the company serviced the market”?

“There is no point to market products that would not be available in the market for sales”, Consultants said in a chat.

They said: “We see a situation where Unilever was unable to bring products from neighbouring African countries as a result of border closure.

Demand for food and home and personal care products dropped about 34%. As shown on its revenue size, sales dropped by 32.5% from N92.025 billion in 2018 to N60.757 billion a year after. As the volume demanded slide, Unilever’s cost of sales follow suite, going down by 10.5% year on year.

The results showed that cost of sales which settled at N54 billion in 2019 had peaked at N64 billion in 2018. The company made about N3 billion loss after tax in the fourth quarter of 2019 alone. Its sales dropped to N9.13 billion in the last three months to year end in 2019 as against N21.666 billion made in the comparable period in 2018.

The analysis showed that both Food and Home care products segments underperformed expectations. In the fourth quarter in 2019, there was about 53% drop as Unilever made N5.235 billion from food segment. Meanwhile, in the comparable period in 2018, the company did N11.12 billion.

Again, in its home and personal care segment, performance was also unattractive. In the fourth quarter of 2019, the segment delivered N3.895 billion as against N10.545 billion in 2018. Meanwhile, in the comparable period, the company made N21.666 billion sales. Its cost of sales in the period was N15.148 billion. This resulted in gross profit of N6.517 billion.

In the other income line, Unilever discontinued operation around its Spread business – Blueband margarine in 2018. Therefore, it recorded gain of more than N2 billion, thus reflating the company’s profit.

Surprisingly, Unilever inventories of finished goods declined. This suggests that it had no trouble making sales per se. In the period when sales were down, the company tied down cash with increased raw and packaging materials. It grew to N8.087 billion as against N7.028 billion in 2018.

The result shows that finished goods were reduced by more than 65% from N3.652 billion in 2018 to N1.255 billion which is positive for the company’s cash flow. The good thing is that trade and receivables account declined, adding about N6 billion to bank balance which impacted cash position positively.