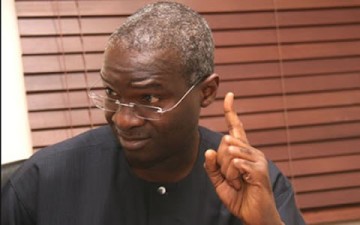 Lagos State Governor Mr. Babatunde Raji Fashola (SAN) has advised children to stay away from all form of vices that can destroy their future and progress.

He gave this advice at the 2015 Children’s Day Celebration in the, calling on the children to desist from drug abuse, bad friends and crimes.

The Governor commended the children for giving him the opportunity to serve the state for eight years stressing that even though the children did not vote during the election he was impressed with their campaigns as they urged their parents to vote through their songs and other presentations.

He enjoined the children not to forget all the things that they had learnt about road safety rules and signs, traffic rules, the climate change rule to protect their environment, hand washing techniques which helped the state to combat outbreak of Ebola Virus.

The Governor then urged the children to stand by the incoming governor of the state, Mr. Akinwunmi Ambode so that he could be able to give good governance to the state as well as provide qualitative education to them.

He did not forget to list some of his achievements, which included the provision of notable infrastructure such as Child and Maternal Centers for the safe delivery of mother and child, good primary and secondary schools to enhance qualitative education delivery and the provision of solar power system in 172 schools in order to power electricity in those schools among others adding that the second phase of the solar power project would soon take off.

Earlier, a pupil of Agidingbi Senior High School, Miss Diugwu Chinaza, had appealed to the State Government to use today’s occasion of to draw awareness to the plights of children around the world that had succumbed to violence in the forms of abuse, exploitation and discrimination.

She stated that since the proclamation by the World Conference for the well-being of children in 1925, Children’s Day has since been celebrated annually in order to display affection and concern for children, their welfare, hope and aspirations.

“I wish to say that the new government can demonstrate its affection and concern for us if only our colleagues from Chibok that are still missing are brought back home to the comfort and safety of their parents alive.”

Miss Chinasa however commended the state governor for his commitment to the delivery for qualitative education in the State just as she appreciated and thanked their teachers for their various efforts, commitment and hard works to position them for a brighter and greater future.