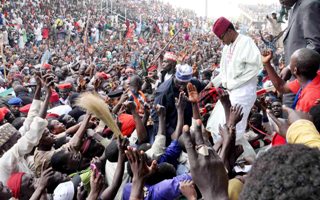 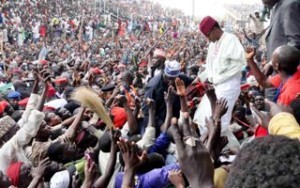 t Muhammadu Buhari must be the most careful Nigerian in decision making as from now on.

He will be saddled with the responsibility of providing quality leadership for Nigerians who stood under the sun and in the rain to casts their votes for him.

It should be noted that most Nigerians voted for APC because of Buhari, so he must be careful in the choices that he would have to make in the nearest future.
Buhari should take a cue from the outgoing President who was loved by many but hated by most just few months in the saddle.
However, many would argue that Jonathan’s government was disrupted by those who promised to make it ungovernable for him. They also would argue that he did not create the myriads of problems he faced while in office.
The country is even in a worse situation than Jonathan met it six years ago. The economy is in shambles while terrorism has become the order of the day in the North East, which rare its head at times in the North Western parts of the country.
The myriads of problems this country is currently grappling with need expert hands to curtail them. His political party on one hand is there to ensure that everyone who participated in the process of unseating a President for the first time in the history of this country receive their ‘booty’  while Nigerians on the other hand are more concerned about how Buhari would make the land greener for them.

Buhari has a tough task of trying to please the bourgeoisies and the proletariats. He should not repeat the former President’s mistake by ignoring the masses.

For instance, the Nigerian masses suffered for two weeks In January 2012 during the fuel subsidy crisis.
It took two weeks for the Jonathan led administration to come up with a solution. During the last fuel crisis in the country which lasted for almost a month, Nigerians made up their minds that Jonathan and his cronies don’t give a damn about the plight of ordinary citizens.

Dezieni Alison Maduke remained as the Minister of Petroleum despite her open atrocities.
It would also be recalled how long it took Jonathan to sack former minister of Aviation, Stella

Oduah.
Another blunder by Jonathan was when over 200 school girls were kidnapped and Jonathan responded three weeks after as a result of the powerful ‘#BringBackOurGirls’ campaign.
Anyone found wanting in Buhari’s administration should not be spared irrespective of his contribution to Buhari’s emergence as President. Nigeria doesn’t belong to a few individuals but to all. Buhari should not allow the invisible ‘cabal’ to disrupt his government.

According to former Vice President Atiku Abubakar, “We must break special interest ‘cabals’ in the power and oil sectors to make significant economic progress.”

Buhari himself reassured Nigerians by saying, “I belong to everybody and I belong to nobody”

Most Nigerians took that statement to heart. Some people even cried tears of joy believing that ‘change’ is here.

It would be recalled that the masses voted Buhari because they see him as one of them due to his simple lifestyle. They believe he would fight for their cause. Anything short of that would be asking for the trouble of Nigerians.
As I always say, there is” a thin line between love and hate” so Buhari should do the bidding of the masses more than the bidding of a few individual because the masses put him there.
Nigerians (masses) prayed for him, they are praying for him and they will continue to pray for him. Therefore, he shouldn’t let Nigerians down because Nigerians will let him down. It is not a threat but a statement of fact.

Buhari should have it at the back of his mind that Nigerians are impatient and want instant ‘change’. They have suffered a lot as a result of bad governance that they won’t have the patience to entertain any form of excuse.

Whatever or whoever the impediment might be should be flushed out by Buhari .
This is a democratic dispensation so he won’t be able to be as autocratic as he was in the early 80’s but most Nigerians want him to replicate a little of his old ways.
I attended most of his political rallies and I saw the love in the eyes of ordinary Nigerians. When he emerged as the Presidential flag bearer of the APC in the historical National convention at Surulere, Lagos, he gave a speech which made me clap for him. My colleague Okunade Adekunle tapped me on my shoulder and said, “Yusuf have you forgotten that you are a journalist?” then I snapped out and sat down.

They say people easily get carried away by the affluence that comes with the position but majority of Nigerians believe that he (Buhari) won’t be carried away, that is why they voted him in.