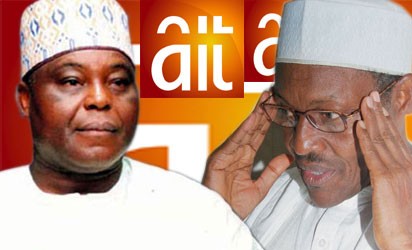 The management of DAAR Communications PLC owners of African Independent Television has stated the nobody can ban the broadcast outfit from carrying out its activities.

AIT reacted to publications in newspapers and on social media that it was barred from the coverage of the activities of the president-elect, General Muhammadu Buhari.

In a statement by AIT, the management “expressed its displeasure by quoting section 22 of the constitution, which says the press, radio, television and other agencies of the mass media shall at all times be free to uphold the responsibility and accountability of the Government to the people.

“DAAR management therefore considers it a worrisome development if security and family concern are used as a justification for censoring AIT or any other media organization from covering and reporting the activities of the President-elect, his incoming administration or any other public officer,” the statement read.

“It therefore states categorically that the allegation of security issues against DAAR Communications is not an issue that the appropriate security agencies should view lightly. The management wants this incident appropriately investigated adding that it has never been involved in any security activities that will compromise State institutions whatsoever.”

“The management looks forward to a progressive and healthy relationship with the incoming administration and hope that the rights and freedom of the media shall not be impeded in the discharge of our collective duties and responsibilities.”

It would be recalled that Garba Shehu, spokesman of the Buhari Campaign Organisation, said: “AIT has been asked to step aside based on security and family concerns.

“In addition, Buhari has decided that they will have to resolve some issues relating to issues of standard and ethics.”