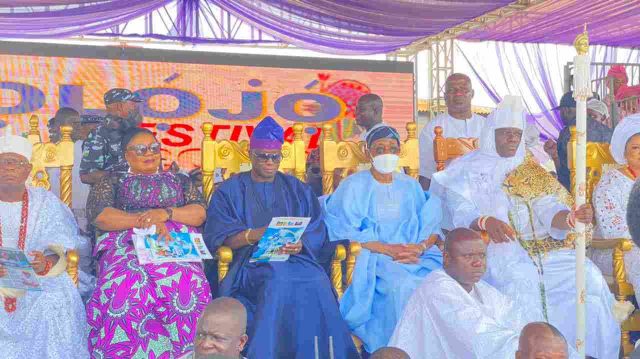 The nation’s president stated this in his address during this year Olojo festival in Ile Ife, Osun state.

President Buhari who was represented at the occasion by Minister of Interior, Rauf Aregbesola averred that the job of security should not be left with the government alone but rather should be the job of all.

He said, “We must be vigilant, we must not leave the work of security to our security agencies alone else there will be problems. All of us must be concerned about security. The government will play its part, in little areas where we are encountering challenges, and we will soon succumb to them before December 2022”

“In the olden days, at a festival like this, we use them to display the harvest of our farms to measure how far we work and our economy. I will be pleased if we can revert to the tradition. It is better to celebrate after work.”

.
“We must work together with security agencies to win the challenges of insecurity”

Buhari who recognized the roles played by Ooni to end insecurity also commended him for his significant efforts in fosting unity amongst all tribes.

Speaking, the state governor, Adegboyega Oyetola welcomed all to the epoch making and spiritually inclined festival that is globally reckoned with.

The governor who was represented by the state Deputy governor Mr. Benedict Alabi congratulated His Imperial Majesty, the Ooni of the source, Kabiyesi Adeyeye Enitan Ogunwusi, for his will and capacity to sustain this rich heritage of his forebears.

He said Olojo festival is indeed a phenomenal event in the history of Ile-ife and by extension the entire Yoruba race as well as the world at large. Of course, This is arguably the only clime where the day of the first dawn is being celebrated across the globe.

He assured that his government will continue to do all within its power to protect the people, provide an enabling environment for a prosperous, secure and progressive Osun.