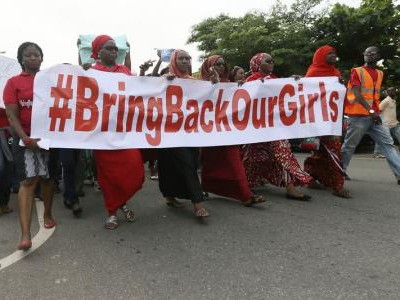 We have had our presidential election and President Goodluck Jonathan hated deeply by Boko Haram has lost.

That means he would not be there as from the end of next month when he hands over to the winner, General Muhammadu Buhari. We as a nation are celebrating several things at the moment.

The darkest day of our history since the annulment of the June 12 election was April 15, 2014, the day we were told over 200 young girls of school age were kidnapped by Boko Haram militants from Government Secondary School, Chibok in Borno State at a time they were preparing to sit for their West African School Certificate Examination. It wasn’t that the Boko Haram insurgents hadn’t killed more people in their campaign at the time.

In fact, before then on February 25, 2014, the insurgents had gone to the Federal Government College, Buni Yadi in Yobe State where they slaughtered 59 male students. The nation choked in horror at all these atrocities. But it was the kidnap of the Chibok young girls that emblematised all that is wrong with our country. It was what announced us internationally as real barbarians.

The significance of the Chibok kidnap is at several levels. The victims were young girls from a part of the country where female education is not particularly encouraged socially or through deliberate government policy.

We are talking of a part of the country that needs human and material investment in education like the body needs blood. Yet, here is an insurgent group that as a policy is against Western education going about killing and kidnapping students and destroying schools.

Parents who thought they had foresight to send their female children to school were railroaded on a guilt trip as they dropped dead one after the other in lonely agony over the loss of their children.

Today, no one knows what state these girls are in, but it cannot be good. When they were kidnapped, Nigerians and the world rose as one to ask they be returned.

The #BringBackOurGirls hash tag became the most popular in the world and their group of campaigners became a permanent sight in Abuja. It’s been almost a year now and we still don’t have the girls back.

Boko Haram has sworn to hold on to the girls until Jonathan leaves or converts to Islam and until their own militants held in Nigerian jails are released.

I would have thought Jonathan’s loss in the election and the celebration of Nigerians welcoming a new epoch should be the best signal to Boko Haram to release these girls who have been to hell and back.

Why are they still holding the girls when Jonathan is on his way out in a matter of few weeks? Shouldn’t they be joining the nation in celebration of the election of Muhammadu Buhari by using this opportunity to give us the gift of the girls’ release as a sign of their goodwill and readiness to join the rest of us to build a new nation? Why are the #BringBackOurGirls campaigners and the rest of us silent about the girls now in the midst of our celebration? Why are we not out there in full campaigning that these girls be released before the inauguration of a new government, so that dark part of our history is closed? Yes, the trauma counselors and medical team would take the girls away to be looked after, but this would mark a true beginning for our nation.
I think the Buhari team needs to be proactive now.

They need to begin now to reach out to the Boko Haram people to signal that they would be ready to talk with them once they come to government at the centre.

The point must be made to the insurgents that the incoming government is not ready to inherit or carryover the liabilities of the Yar’Adua and Jonathan governments where Boko Haram is concerned. They must tell the militants they are prepared to start on a clean slate, but that the militants must show goodwill and willingness to negotiate by releasing the girls before inauguration.

Buhari must not just sit there and say he’s waiting to take over government first before he can do anything and he must know that a military solution will never bring the girls back. He needs to begin work on this now.

As for the rest of us, there’s no way to hide the fact that the longer the girls remain in captivity, the more diminished we are as a people.

The national and international silence over these girls now is a scandal! We need to up the ante now! We need to reenergise the campaign to get them back! Boko Haram should release those girls now as a sign that they are ready to negotiate with the new Buhari government once President Jonathan leaves.

Jonathan won’t be taking the credit for such a release as the Buhari era has started from the moment he was declared winner of this historic election, so everyone would know that it’s his election that opened the opportunity for the release of the girls.

So, people, let’s all get back actively on the #BringBackOurGirls campaign now! It must be our duty to ensure the girls are released before inauguration on May 29, 2015.
• Emetulu, formerly of The Guardian, wrote from London.