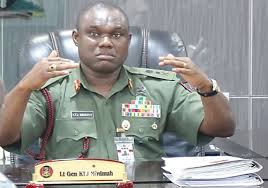 THE Nigerian Army has sacked 200 soldiers from the force, following claims that the soldiers fled from the battlefront while Boko Haram advanced.

According to British Broadcasting Corporation (BBC) Hausa service, the soldiers were sacked this week after allegations that they fled Mubi in Adamaw a State in November 2014, while Boko Haram took the town.

A military source had told TheCable that as many as 4,000 soldiers were to be dismissed from the force, with the military hoping to “rid the force of cowardice in all its rank and file.”

The recently-dismissed soldiers insisted they were being unfairly targeted, saying they were dismissed without appearing before a court martial.

They added that their failure to fight was because they lacked the weapons to match Boko Haram’s firepower.

“We are accused of disobeying orders to fight insurgents and also for allowing them to take over Mubi town the last time. The army headquarters sent signal for our dismissal,” he had said.

Reacting, however, the Nigerian Army said disciplinary steps against the affected soldiers was not outright dismissal as it was generally believed.

It rather explained that  disciplinary processes in the Army required thorough investigation, fair hearing and impartial dispensation of justice.

The defence spokesperson, Colonel S. K Usman, told the Nigerian Tribune, in Abuja, on Wednesday that officers who had abandoned their duty post at the approach of enemies, especially in the ongoing fight against terrorists in the North-East, were not included in the fight.

“I want to assure you that  most of the stories being peddled  are far from accurate. Same thing with the figures being bandied around. The Nigerian Army would not tolerate any act of indiscipline let alone cowardice and desertion from any officer or soldier. Most of those that abandoned locations at the approach of the terrorists did not join the Army to fight,” he said.

He also noted that there was no pre-planned outright dismissal of any soldier, let alone punishing any commander for not doing so.

According to him, disciplinary processes or trials were never done with prior intention to dismiss anyone in the Nigerian Army, adding that the only intention was to dispense justice and, even at that, due process was always followed.

“Thank you for your inquiry on disciplinary action being taken against some soldiers for cowardice and desertion in the face of enemies in the Nigerian Army, especially as regards the fight against Boko Haram terrorists.

“However, the issue of lack of equipment or weapons is baseless, as there has never been a time when the Boko Haram terrorists were better equipped or armed than the Nigerian Army,” he said.