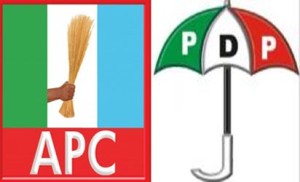 The All Progressives Congress (APC) has lost eight seats to the Peoples Democratic Party (PDP) at the Lagos State House of Assembly, clinching 32 out of the 40 seats.

Unlike the seventh Assembly in which the APC held on to all the 40 seats, thereby making the Lagos legislature a one-party, the eighth Assembly may witness more vibrancy and live with the PDP members coming on board.

However, only one of the two principal officers who won their primaries, was able to return, while the incumbent Deputy Speaker, Taiwo Kolawole from Ajeromi/Ifelodun lost the chance to return for a fifth term.

The incumbent Deputy Leader of the House, Rotimi Abiru from Shomolu Constituency 2 is the only returning principal officer to the House.

Kolawole who is the Deputy Speaker of the State Assembly is believed to be gunning for the speakership post, failed to secure his return bid into the House.

The Deputy Speaker is fondly referred to as Methuselah among his colleagues having served since 1999 lost to Dayo Famakinwa of the PDP, who was on Sunday returned as the winner of the House of Assembly election for Ajeromi-Ifelodun Constituency 2.