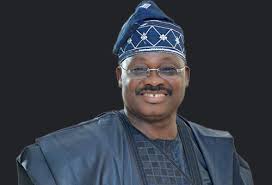 Though the 2015 governorship election in Oyo state is over and the winner emerged, the Accord Party candidate, Senator Rashidi Ladoja has promised to challenge the outcome at the Tribunal. OLUSESAN LAOYE reports

The governorship election in Oyo State has been concluded, and all those who participated in the election have continued to count their losses and gains. The election was one of the keenly contested in the country and at the end of the day, it went as was predicted. Before the election which was eventually won by the incumbent governor, Senator Abiola Ajimobi of the All Progressives Congress (APC) who broke the second term jinx in the state, analysts predicted that the contest would be between Ajimobi and the candidate of the Accord Party, Senator Rashidi Ladoja who trailed behind the governor.

Despite the fact that the winner of the election has been announced, Senator Ladoja who came second is still insisting that Ajimobi did not win as he is ready to contest his victory at the election Tribunal. Of all the 14 candidates that contested the governorship election of Oyo state, five of them are prominent and the election results showed their political weights, popularity and prominence among the people of the state. These prominent five are, Ajimobi, Ladoja, Otunba Adebayo Alao Akala of the Labour Party; Senator Teslim Folarin of the Peoples Democratic Party (PDP) and Engr. Seyi Makinde of the Social Democratic party (SDP).  With the way the election went, it was obvious right from the time the battle started that Ajimobi or Ladoja would carry the day with others trailing behind.

Although the election went as predicted, there were various factors which came into play especially between Ladoja and Ajimobi and one of them eventually outsmarted the other in the last few days to the election.

From what was on ground, and the voting pattern, it was glaring that the election would favour one out of the four Ibadan Indigenes who contested the election with Akala, who is the non-Ibadan indigene in the contest. Ajimobi who had some young politicians and technocrats working for him realized early enough that there was no way he could have contested Ibadan votes with Ladoja, who drew his entire strength from the place. He also realized that Ogbomosho was no go area for any one of them and rather than relying on the votes from Ibadan, he concentrated his efforts in Oke Ogun where he eventually got the votes and the local governments that gave him the victory and majority in the state House of Assembly.

Although the trio of Ladoja, Akala and Ajimobi worked very hard in Oke Ogun which played the joker, Ajimobi few weeks to the election rushed all the uncompleted projects in Oke Ogun. He even commissioned a road project in Iseyin which usually pull the highest votes in the area. Judging from the history of governorship elections in the state, there are two areas that always determine who wins the governorship outside Ibadan. Ogbomosho and Iseyin are noted to hold the aces to electoral victory in the state. It was Iseyin that gave the victory to the late Chief Kolapo Ishola when he contested the election with an Ibadan man who picked an Ogbomosho person as his running mate. That was why the area was compensated with a juicy appointment of the commissioner for works.

Ajomobi having realised this, left Ibadan to concentrate on other areas that gave him the votes to win the election. Right from the onset, he has an Okeogun man as his Deputy which made the people of the area happy. Despite this, Ajimobi an astute politician, spread his developmental projects to all parts of the state including Oke ogun . It was even said that no governor has ever concentrated so much energy, time and project in the area as Ajimobi did.

Apart from the Oke ogun factor, he benefitted from the relationship he had with the Alaafin of Oyo, Oba Lamide Adeyemi the 111 who used his influence to deliver the local governments in his domain to Ajimobi. As a matter of fact, Ajimobi was underrated by his opponents who felt that because of what they described as anti- peoples policy he was hated by the people. He too was aware of this and as such he concentrated his efforts for a second term on personalities within the state, right from the inception of his administration.

The appointment of sons and daughters of key figures across the political class and the elites in the state was a sign that he would break the second term jinx in Oyo state. His total votes with 20 local governments, and 18 seats in the state Assembly was 327, 310.

The most affected of all the big five governorship candidates in Oyo state is Senator Ladoja, who felt that he had a better advantage than the others. Ladoja even before Ajimobi settled down in office and before Akala, Makinde and Folarin made up their minds to go into the contest, had rolled out the Accord Party machineries to convince the people of the state, on the reasons why he should be the choice. What also gave Ladoja so much confidence was his relationship and the underground support he had from the teachers and the civil servants. Even the traders in Ibadan metropolis were in his favour because of the grouse against Ajimobi over the demolition of their stalls and what the government viewed as illegal structures. The demolition exercise was what paved the way for the constructions and the rehabilitation of many roads in the state. Ajimobi used the projects at the last minute to campaign against his opponents.

What also worked against Ladoja was his over dependent on the Ibadan votes thinking that if he secured the bulk votes of his people, he would be able to gather votes from Oke ogun and Ibarapa areas of the state because he was already aware that Ogbomosho was a no go area for him because of Akala.

Those he relied upon in Oke Ogun ditched him at the last minute. He had thought that the votes in the area would be heavily shared between him and Ajimobi, but the result he got at the end of the day disappointed him. Although he made only 17 % in all the 33 local governments, he was not able to defeat Ajimobi with the numbers of votes from the areas. The eight local governments he got were in Ibadan and this secured him seven local governments and eight seats in the state Assembly. The total votes got by Ladoja were 254,522.

Ladoja believes that the election was rigged by the APC through the state electoral Commissioner Mr. Akeju, who was enmeshed in controversy since the time he was in Osun state. Akeju was believed to be a strong friend of Asiwaju Ahmed Bola Tinubu and that is why Ladoja and his Accord Party refused to accept the result of the governorship election in Oyo state. But the evidence on ground revealed that Ajimobi won in all fronts and that was why the APC was confident that it was ready to defend its victory in Oyo state.

Akala’s victory in his domain was not contradicted because it was known that none of them could wrestle the local governments in Ogbomosho area from him and that was where he got the bulk votes of 182,723 which gave him six seats in the state House of Assembly.

Both Folarin and Makinde before the election were not in the picture and this was responsible for their poor performance at the polls.  The performance of Makinde did not actually baffle the people of the state, but that of Folarin was a total indication that the PDP and its candidate are not popular in the state.

It was unthinkable that Folarin with his clout and former position as the Senate Leader could receive the kind of result he got. He only managed to get 78,119 votes without a local government and a seat in the state Assembly. Hallmark gathered that what worked against him was the internal crisis in the party which took Akala and Makinde out of the PDP. It was also observed that some of the leaders of the party did not work for him.

The evidence that Folarin and the PDP would perform woefully in the governorship election despite the high hopes placed on the presidency and leaders of the party in Abuja, manifested on the day of the election, when notable leaders of the party across the state, failed to vote or mobilize for him, as they did during the Presidential election.

Oloye Jumoke Akinjide, who happens to be from the same local government with Folarin failed to show up at her polling unit to vote. Even in Folarin’s polling unit the turnout was low and voters refused to accord him recognition during voting process. He was accused of being stingy. Majority of those who openly abused him are women and from our observation, it was glaring that they are members of the Accord party and the APC. Despite the fact that he came to the polling unit with heavily armed police men he stood quietly at a corner without altering a word or respond to the abuses rained on him.

With the rejection of the election results, both the Accord Party and the APC have been engaging in verbal war. Mr. Nureni Adisa the Accord party national secretary, who refused to sign the result, told Hallmark that they would challenge Ajimobi at the Tribunal because the figures awarded to him did not match with the figures obtained at the field.

But one of the chieftains of the APC, Mr. Mojeed Olaoya said he had the right to decide what suits him and what was sure was the fact that the people of the state have spoken and the Accord party was free to go to court.

The governor of the state, Ajimobi sensing the threat to security issued a stern warning of dealing ruthlessly with anyone found to be involved in violence and engaging in any acts that could breach the peace of the state.

While warning against violence, Ajimobi said “surprisingly, the Accord Party has been complaining that it would go to court. No problem. If you look at the results of the election and the conduct, it was the freest and fairest election ever held. Everybody said it, all his agents signed at the polling units. It is only at the final collation centre that they did not sign, let him go to court,” he said.