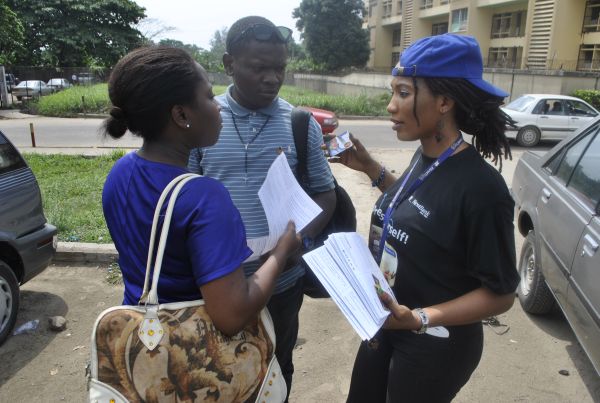 Banks within university environment usually have a large turnout of customers. It wasn’t any different when our across the counter team visited some banks within the University of Ibadan environment to review the quality of service being rendered. Our criteria included bank professionalism, customer care efficiency, security consciousness, corporate environment and ATM efficiency.

This branch of First Bank occupies a massive building located along the bustling University of Ibadan road shares the same premises with the institution. Although it has a modest parking lot which accommodates 10 vehicles, it has another parking space just outside the bank premises which accommodates another 6 vehicles leaving other vehicle owners the option than to park elsewhere.

On our visit to the bank, a security official was sighted outside the branch conducting security checks on customers entering the banking hall, while another official manned the security door leading into the branch.

What confronted our team at the banking hall was a large crowd. There were well over 50 customers waiting to carry out one transaction or the other within the hall. It was rowdy, and a bit disorganised. There were about 6 cashiers on duty when we visited with other cubicles (about four) left empty. The customer care unit also had four representatives who seemed overwhelmed by the number of customers whose complaints and enquiries had to be attended to.

Our Across the counter teams transaction itself took quite a while as the queue barely moved, it took close to ten minutes for each customer to be attended to. One of the bank officials had to divide the queue by assigning those making deposits to two cashiers and those withdrawing to the other four cashiers. Across the counter transaction was cumbersome as customers lamented about the slowness of service delivery making customers wonder whether the problem was that of slow network connection.

It was not any better at the ATM points located outside the banking hall. Over 70 customers’ queued as they struggled to use the machines which were about 8 in number with two not working as at the time of our visit.

One would have expected Skye bank to make smart business moves by taking advantage of the huge customers that flooded First Bank which was just a stone throw from the bank by having more Automated Teller Machines (ATM). Our across the counter representative had earlier visited the bank’s ATM last Thursday evening and none of the two machines were working. When we visited around noon on Friday, the machines had started to work. However, there was an avalanche of customers waiting to use the two available machines as customers lamented the inefficiency of the bank’s ATM.

One must however commend this branch of Skye Bank, though they had an impressive turnout of customers as well, the banking hall was neat and orderly. There were seats for customers. The bank has good parking space as well and bank customers do not have to park on the road thereby obstructing traffic. Although the three security men at the gate were busy gossiping rather than doing their jobs, the other security official who manned the entrance of the banking hall was quite professional. Transaction at the branch took about five minutes.

What will welcome anyone to the bank is the number of customers queuing to use the Automated Teller Machines (ATM) which were five in number but two of the machines close to the gate of the banking hall were out of order as at the time our visit.

There were four tellers with one specifically for bulk payments. The banking hall was well organised as there were seats for customers to sit while waiting for their turn. Across the counter transaction took about four minutes. There were four customer care representatives who attended to customers but it took over ten minutes for them to attend to each customer.