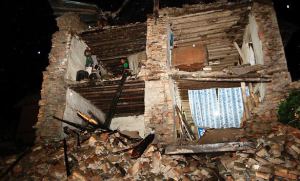 A fresh 7.3 earthquake rattled Nepal and northern India on Tuesday, killing at least nine people and injuring 300 in the region as many buildings already weakened by last month’s massive temblor were sent tumbling to the ground.

At least four people were killed in Chautara town in Sindhupalchowk district, north of the Nepali capital Kathmandu, a spokesperson for the International Organisation for Migration said.

Police in the Himalayan nation confirmed at least three deaths, as the government struggled with patchy phone lines to gather information. It wasn’t immediately clear if they were referring to the same people.

Four people were also killed in Indian states bordering Nepal, one in Uttar Pradesh and three in Bihar, officials said.

One person died in Tibet after rocks fell on a car, according to Chinese state media.

The US Geological Survey said on Tuesday’s earthquake was centred 68km west of the town of Namche Bazaar, close to Mount Everest and the border with Tibet.

The epicentre of Tuesday’s quake was close to Everest Base Camp, which was evacuated after an avalanche triggered by last month’s quake killed 18 climbers. Mountaineers seeking to scale the world’s tallest peak have called off this year’s Everest season.

Nepal is still picking up the pieces from the devastation caused by last month’s earthquake, the worst in more than 80 years in the country. Hundreds of thousands of buildings, including many ancient sites, were destroyed and many more were damaged.
The latest earthquake unleashed panic in Kathmandu, Reuters witnesses said.

Parents could be seen clutching children tightly and hundreds of people were frantically trying to call relatives on their mobile phones.

Shopkeepers closed their shops and the streets were jammed with people rushing to check on their families.

“I’m heading straight home,” said Bishal Rai, a man in his 20s, who said he was trying to contact his family in the north of the capital.

Medics and volunteers formed a human chain at a Kathmandu hospital to keep a path open for ambulances.

A volunteer at the hospital said five or six injured people had been brought in, two on stretchers. So far, few ambulances had arrived, he said.

Some aid teams which were on their way back from Nepal were considering whether to return to the country to help.

Israeli Prime Minister Benjamin Netanyahu, speaking at welcoming ceremony for a military rescue delegation after it landed back in Tel Aviv from Nepal, said they were prepared to go back if needed.

De Wojtek Wilk, CEO of the Polish Centre for International Aid, said he could send his team of medics “back straight from the airport.”

“There is a huge concern for the people who may be living in structures that did not prove earthquake sound,” he said.

“Our team is conducting an aerial survey before we decide to launch rescue operations,” he said.
In Sindhupalchowk district, which suffered the heaviest death toll in last month’s quake, the new temblor also triggered at least three big landslides in the district. A district official there said 12 people had been injured.

“The latest earthquake has left us shaken. I am still trembling,” the official, Diwakar Koirala, said, when reached soon after the quake.

Rhita Doma Sherpa, a nurse with the Mountain Medicine Centre in Namche Bazaar near the quake’s epicentre, said the quake caused cracks in several buildings, including a school, but she had not seen major damage.

“It was lunchtime. All the kids were outside. Thank god,” she said.

Residents in the Indian town of Siliguri, near the border with Nepal, said chunks of concrete fell off one or two buildings.

Last month’s quake killed at least 8 046 people and injured more than 17 800. It was recorded at 7.8 magnitude, almost six times stronger than Tuesday’s quake.

But a 7.3 magnitude earthquake has the potential to cause significant damage and landslides.