Home Politics 2023: If I were not contesting I won’t vote Atiku or Obi,...
Facebook
Twitter
WhatsApp
Linkedin
Email
Print

Bola Tinubu, presidential candidate of the All Progressives Congress (APC), says he won’t vote for any of his counterparts if he weren’t contesting the 2023 general elections because they lack capacity.

According to Tinubu, he won’t vote for Peter Obi of the Labour Party (LP), and Atiku Abubakar of the Peoples Democratic Party (PDP) if he weren’t on the ballot.

The former Lagos State governor stated this in an interview with BBC News on Monday shortly after his appearance at the Chatham House in London, the United Kingdom.

Asked if he would vote any of Atiku or Obi if he weren’t contesting, Tinubu said, “None, because they are not as competent as any other person out there. They have no track record, none of them is qualified except me.”

The APC candidate also said those criticising his source of wealth were driven by envy.

According to him, his wealth came from investments in real estate.

“I am not denying my wealth. I was the most investigated, the most accused governor in the opposition for eight years and since I left the office, I have not taken any government appointment, no government contract,” he said, adding that he doesn’t share any of Lagos resources with the state government. 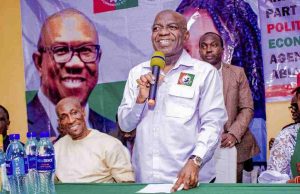