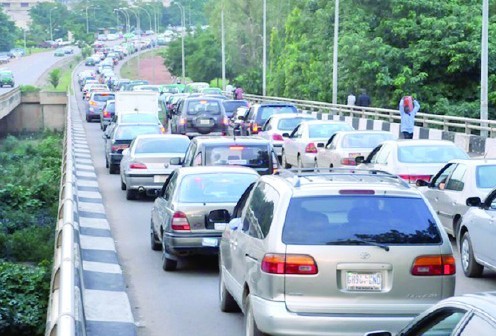 Three times last week, taxi drivers in Abuja staged protests in the streets over what they described as unwarranted extortion and physical assaults against the Federal Capital Territory (FCT) Directorate of Road Traffic Services (DRTS), popularly known as Vehicle Inspection Officers (VIOs).  The said violent encounters, the drivers alleged, led to several accidents and deaths on the highways, in addition to depriving the vehicle owners hard earned incomes from their trade. In this interview with Chibisi Ohakah in Abuja, the Director of the FCT DRTS, Mr. Danjuma Aliyu Garuba, said the drivers’claims are spurious and malicious. He asserted that hoodlums are pushing into the nation’s capital using the commercial drivers’outlet. He however spoke of efforts being made by his directorate to streamline its operations to reduce friction with commercial vehicle drivers in the FCT.

What is the weeklong tug-of-war between taxi drivers in the FCT and the VIO all about? We hear they have vowed to physically attack your task force and any VIO operative at sight anywhere on Abuja road?

We woke up last Monday to see taxi drivers, joined by hoodlums, demonstating with placards, alleging so many things against our task force and  personnel. The summation of what they want is that the FCT should remove law and order so that anarchy can rule on the roads, simple! But there is no society that can survive without law and order.

Abuja is an important city to both the government and the people of Nigeria. That is why it was painstakinly created. It runs on a Master Plan, so anarchy can not rule here. But along the line, right from the time of the former minister of the Federal Capital Territory, certain things started going wrong – things that were not part of the original plan. For instance, we saw bikes (‘okada’)  and tricycles hitherto banned from the city center, now entering the city. And it was despite the penalties attached to the offences.

What are the categories of taxis and what does the law say about them?

In the case of taxi, we have painted taxis and those operating under operators’ licence. Both are identifiable and recognised by law to operate on FCT roads. But you see unmarked vehicles operating illegally as taxis (kabu kabu) without any identity?

As the FCT DRTS, we have relationships with the painted taxis through their various unions. We relate in various ways including seminars, meetings, workshops and collaborations, etc on the mutual business of transport administration.

Part of the mandate of the directorate is to guide and guard transport services in the FCT to ease movement within the territory. The law is also there for various traffic offences; what we do is to monitor compliance.

The demonstrators are complaining that they do not have parks to load passengers. They also allege they are often made to part with monies that end up in VIO pockets…

Their claim is untrue.  The question is, the parks provided for them, have they finished using them? Go to Area 1 and Area 3, there is a park provided for them, but they would rather cluster around the roundabout, under the Mile 1 Bridge, and cause hold-up, inconveniencing other road users.  Same applies to Berger Bridge. You need to generally go round the city immediately after work or in the early morning and see what we are talking about.

They have also converted the top of the bridges to parks. Ordinarily, a taxi should drop off or pick a passenger and move on, but they would park and start loading around the roundabout right under the bridges. We are enemies of the drivers because we say, ‘no you cannot do this.’

On the claims of enrichment on the side of VIOs, I’m waiting for the day someone would come forward to say an official of the directorate asked for bribe. I must say that any official asking for money instead of sticking to what the law says, is stepping out of his mandate, and the day he is caught, we treat him as unpatriotic elements are treated.

Indeed, the drivers are the ones corrupting the officials of the VIO. They are the ones tempting the officials with bribes instead of paying penalties. What motorists do not understand is that it is cheaper to pay fines than bribes. While paying fines, we come in with corrective steps on the motorist. For instance, if his offence is expired vehicle papers, we insist that in addition, he renews them. But after bribes only, he may be caught again the same day or next day; and he bribes again, isn’t it? Bribes don’t indemnify anyone; being lawful does. That is one thing I notice many drivers do not know.

We understand you have held a number of meetings with their unions, what is the situation of things now?

Yes, we have held meetings with their unions – the Road Transport Employers Association, the National Union of Road Transport Workers, and others. First of all, we identified that the culprits in the demonstrations are mostly unpainted cab drivers, with a few disgruntled drivers of painted taxis.

We also mutually agreed that these unpainted cab drivers are the sources of the criminal activities perpetrated with cabs, such as kidnapping and robbery. We also agreed there is the need to tighten surveillance on the Abuja roads to ensure that only identifiable taxis are seen picking or dropping off passengers so that when anything happens, it will be easier to know where to start.

We also agreed that there is need for all the groups to educate their members on the rules of engagement to ensure that the law is obeyed at all times to avoid rumours or penalties, or the stories of extortion that are often difficult to deal with.

Beyond the complaints of the drivers, we witness often times when operatives of the VIO are physical with drivers, not caring about the damage they cause when clamping and towing vehicles. Don’t you think there is some home work to do?

Let me say that in the past ten months, we have commenced a rebranding regime. We are conducting periodic in-house seminars, workshops and tutorials meant to crosscheck our operations. We have tried to say to our people, ‘hey, you don’t have to be aggressive to press your point to an erring motorist.’

We also had adopted public lectures, press releases, public enlightenment meetings, collaborations with stakeholders in the transportation industry to educate the public on existing traffic laws and the need to stay on the right side of the law. We also acquaint them on innovations, in terms of new government policies

The public must also know that there are other traffic officers on the road, not just the VIO. There are traffic officers from sister agencies. Virtually all the transport unions have traffic officers and task forces. We have seen drivers being molested by ‘agberos,’ task forces from drivers’ unions. But you discover that every contravention with a vehicle driver is attributed to the VIO. These are some of the ugly situations we are living with

So while we are adjusting in-house, and doing our best to enlighten members of the public, we have asked the unions to educate the drivers on best practices while driving.

How come Federal Road Safety Corps (FRSC) is not accused of being physical and leading drivers to accidents, as  VIOs do?

Those are part of lies told against VIOs. I don’t want to go into the comparison with FRSC. I was with the FRSC for 18 years; so you cannot conclude. Let us not just go there. The truth is hoodlums have invaded the FCT using the commercial transport sector as a window. The other day, a mobile court, with a sitting magistrate in Dei Dei was attacked by hoodlums. The impunity in the nation’s capital is getting out of hand.

One day at Area 1, our bus was almost burnt by an irate crowd. A woman contravened. She was allowed to drive by herself with our vehile leading her to our office. While driving, she tried to make calls and soon drove into the gutter. The crowd did not want to know what happened. It took the policemen from Wuye Police station to save our men and the bus.

I am sure you also heard the malicious rumour that our men struggled with a driver until an accident happened, and a woman and her child died. Nothing can be far from the truth.  I listened to the story on radio and only to discover that it involved a sister agency.

Given the picture of hostility against your men which you have painted, what is the way out?

We are reviewing our operations in the city. We are also reducing the size of our men on the roads. With all kinds of traffic task forces on the roads, we are also trying to properly identify our personnel. We also  monitor more closely what our operatives are doing on the roads. We are introducing a back-up surveillance team to monitor the roads.

In this monitoring exercise, we seek the cooperation of the public. Anyone noticing anything unbecoming between our staff and drivers should alert us immediately. The surveillance will be a rapid response team and shall respond immediately.

We are carrying out public enlightenment exercises where we talk to drivers one-on-one on the need to be lawful, and obey traffic rules. We educate them on how to respond when accosted by any traffic officer. The public must know where one’s right stops and the other’s begin. The public must know the dangers in patronising unmarked cabs, and what to do when a driver is breaking the law with his driving, packing, and picking or dropping off passengers.

We have held several meetings with the executives of the various transport unions, and even the office of the permanent secretary of the FCT, and it was identified that the culprits of the demonstrations are mainly unpainted cab drivers who were joined by some disgruntled taxi drivers. They totally dissociated themselves from the crisis and pledged to continue to support our operations in the FCT.

We have agreed together on the need to increase the number of times we will all be meeting and reviewing events in the sector.

It seems you are respecting the threat from drivers; your men are not yet back to the roads?

We never left the roads. Who said we are afraid of them? We are reviewing our operations, with the view to strengthening our services. It was only for two days when the demonstration held. And you would notice that all kinds of motorists appeared on the roads. You saw even long distance buses coming from the South East, South South, North East and South West abandoning their garages to participate in local transport in the city. All kinds of cabs and even the keke people flooded the city. That would tell you what we are dealing with.

The FCT Directorate of Road Traffic Services has a mandate and a job to do. We cannot allow anarchy to rule Abuja roads.