The vagueness surrounding the coronavirus pandemic which has crippled many economies has put the Nigerian foreign exchange market under intense pressure as the country’s main source of the dollar continues to thin out due to the free fall of crude oil price, which declined to around $26 per barrel on Friday.

The Central Bank of Nigeria (CBN) was forced to pull the plug on the local currency at the bureau de change segment of the forex market on Friday, directing operators to sell a dollar for N380, because it was not feasible to exchange it at N360. But the apex bank had reiterated a week earlier it had enough external reserves to continue to defend the naira. It even threatened to deal ruthlessly with anyone speculating against the naira.

“What the CBN did was to close the gap between their rate and the panic buying rate. They have seen a gap that is as wide as N30 between the rates they are selling to (BDC) operators and what the market is demanding. In a situation like that, you cannot remain aloof,” Mallam Aminu Gwadagbe, President, Association of Bureau de Change Operators of Nigeria (ABCON) told Business Hallmark.

Financial analysts, however, believe there would be a further devaluation of the naira if the volatility in the Nigerian forex market persists and if the coronavirus pandemic and battle for supremacy between Saudi Arabia and Russia, which has caused a glut in the crude oil market, making the price to tumble to $26.98 on Friday, its lowest in over 18 years. The CBN had pegged the naira at N360/$ at the BDC segment for over four years but with the country’s external reserves declining by 17.39 per cent in the last one year to $ 35.94 billion on March 19, 2020, is beginning to raise concerns.

JP Morgan had recently forecasted that the Central Bank may be forced to devalue the naira by about 10 per cent and it expects the exchange rate to be N400 per dollar by the end of June.

While the apex claimed to be unifying the country’s forex rates in the different segments of the market, the dollar was sold for N307 at the interbank market, SMIS rates were N358.51/$ and at the Investors and Exporters (I&E) window it depreciated by N1.65k to N372.00/$ on Friday. At the parallel market, cash rates depreciated by N1 to close at N376.00/$, while the transfer rate remained unchanged at N400.00/$.

“Although the Central Bank has been doing its best to strengthen the naira, there is a limit to how monetary policy can be used to salvage the value of the naira because as long as we continue to have the source of the foreign exchange predominately coming from oil revenue which price Nigeria cannot control it is difficult to beat your chest on what happens.  Oil at some point was around $70 per barrel this year, it currently below $30 per barrel,” said Ayodele Akinwunmi, Head, Research, FDSH Merchant Bank in an exclusive chat with Business Hallmark. He reasoned that the disagreement between OPEC and Russia on oil output cut has worsened the situation, adding that the challenge is now from both output and price, which has affected the inflow of dollar into Nigeria. He claimed monetary policies cannot address these issues.

Moses Ojo, Head, Business Development and Research, PanAfrican Capitals noted that considering all the variables that have been impacting the global economy, it was obvious that the Central Bank would not be able to continue to defend the local currency. “The $30 billion external reserves benchmark which the CBN set was just to instil confidence in investors because I knew they cannot get there before devaluing the naira. I know their limit would be around $35 billion to $36 billion,” he asserted. He predicted that the dollar would be sold above N400 at the parallel market, saying there would be a further devaluation of the naira if the fall in the price of oil does not halt. 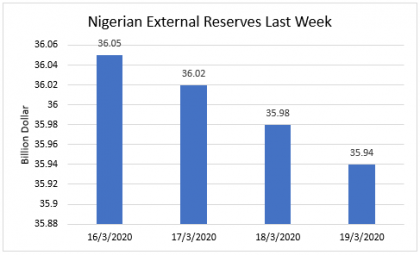 Local investors have been converting their assets into dollar to avoid being caught in the 2016 situation when the country suffered an acute dollar shortage, hiking to N525/$ at the parallel due to oil which dropped to around $27 which consequently pushed the Nigerian economy into 18 months recession.

Dr Vincent Nwani, Managing Consultant, RTC Advisory, envisaged further devaluation in the coming months. “This is a response to the shortage of dollar inflow into the country, elevated by the Saudi Arabia-Russia Oil war on the one hand and coronavirus on the other hand,” he explained. He argued that even after the coronavirus challenge has been addressed, there is no hope of a higher oil price as the Saudi-Russia supremacy war may linger longer.

Abayomi Ajayi, a financial analyst, told Business Hallmark that naira devaluation is “just the case of delaying the inevitable. Current conditions do not favour government as there are no flows into the reserves. From the last OMO auction, we saw the sort of risk premiums investors are demanding, so devaluation would reduce the pressure on the local currency as it’ll effectively reduce the amount of dollars that will be exchanged for naira.”

The apex bank last week announced N1.1 trillion intervention funds to prevent the economy from heading into another recession. Meanwhile, the Monetary Policy Committee (MPC) will be meeting in Abuja on Monday and Tuesday and the impact of the coronavirus on the Nigerian economy and the pressure in the forex market would dominate its discussion.

Coronavirus cases in Nigeria were 12 last week and there has been not a lockdown in the country, although the government has urged Nigerians to embrace social distancing, limiting gathering to less than 50 people. More than 10 states have shut down schools with effect from Monday, March 23. However, many countries that get oil supply from Nigeria have witnessed lockdown and cutting oil consumption significantly due to the pandemic. An estimated 235,000 people have been infected by the coronavirus globally with fatality surpassing 11,000.