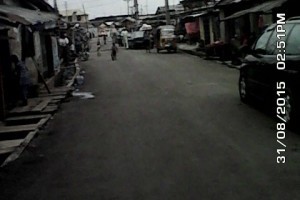 Residents of Akinlabi and Ola Oluwa Streets in Orile-Agege area of Lagos State have their hearts filled with joy as their streets, which have been begging for attention for a long time, were given a facelift following the grading and the tarring of their roads.

The two streets which are approximately 170m and 190m long respectively and are close to the Agbotikuyo bus stop are always a nightmare for residents especially during the rainy season according to residents but those experiences will soon be a thing of the past.

At an inspection of the project last week Executive Secretary of Orile-Agege Local Council Development Area Hon. Akeem Adeyinka reiterated his commitment to bring development to the area though the grading and tarring of more streets.

“Orile-Agege can only be a better place to live if our roads are good because this is part of the ways to enhance business activities in our area,” Adeyinka stated, adding that its the councils desire to make life easier for the populace.

He pointed that the roads would in no small measure complement the proposed Pen Cinema flyover bridge designed to ease traffic congestion in the Agege area of which is like a conjoined twins with Orile-Agege as the streets in question serves as alternative to the ever-busy Old Ipaja Road.

Ogundare who is the Baale of Jafojo Magbon, however expressed relief stressing that residents can now put behind them the fears that grip them due to the bad state of the road.

Ogundare acknowledged that most of the businesses and shop owners, in particular, will also breath a sigh of relief as they can now do away with the stress of moving in their goods to their shops physically no thanks to the impassable nature of the road.

He stated that most commercial motorists shun traders from the streets whenever they call them for the transportation of their goods from the market.

He commended Hon Adeyinka for turning his attention to the area after years of neglect.

For Alhaji Kelani, a landlord at Ola-Oluwa Street, the tarring of the road is one of the best things to have happened to the residents.

Kelani said since he built his house in 1991, the poor state of the road has always leaves him sad.

“Our street is an alternative for motorists who want to avoid the gridlock at Agbotikuyo and because of the fact that it was not tarred; we have to battle perpetually with dusts which has affected the health of many people in the street,” he lamented before putting on a joyful smile in anticipation of the impending tarring of the street.

Orile-Agege APC chairman, Prince Sunday Ajayi, was full of praises for the ES pointing he has done so much within the short time in office.

“From the construction of the customary court, to the building of an extension of an administrative office, and many more, history shows that he has done more than any other person while in office,” he emphasized. While Akinlabi street has been completed, Ola-Oluwa street is scheduled to be completed this weekend.