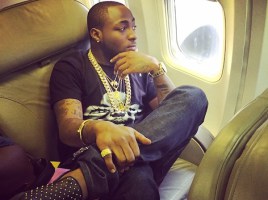 Acouple of days ago, it was reported that popular music act, Davido was delivered of a baby girl by 28-year old Sophia Momodu. Sophia, also known as Bella Donna is a close relation of Ovation publisher, Dele Momodu . Gist merchants allege that Davido and Abuja-based University dropout, Sophia, met July 2014 during one of his trips.

But no sooner than the story emanated than another report from Davido’s camp refuted the claim. One of his representatives dismissed claims that woman Sophie Momodu had given birth to his first child.

“Bloggers are just confused, Davido doesn’t have a child yet, his sister is still pregnant too. Davido simply put up a baby’s hand to signify a new beginning and it’s causing wahala” Davido’s rep said. But contrary to the reports that the baby was his sisters, Sharon, another report has confirmed that Davido was the one actually welcomed a daughter, not his sister. Sharon is still pregnant.

Meanwhile, days ago, the Aiye crooner posted on Instagram the picture of baby’s hand being held with caption “God is Great , New life, New beginnings, New Album , It’s our year” .Another picture showing he was present at his baby mama’s baby-shower held a few weeks ago has been circulating on the internet.

For further assertion, Ovation Publisher Dele Momodu who is a cousin to Sophie shared the photos on his instagram page and wrote “Warmest congratulations to Mr David Adeleke Davido and my cousin, Sophie Momodu on the birth of your beautiful daughter. May God always provide for you and protect your family”

Recall in March, Davido refuted impregnating the said Sophie even though some of his crews acknowledged Davido and Sophie were in a relationship. He was gaining attention from dating a Guinea-born US-based model, Sira.