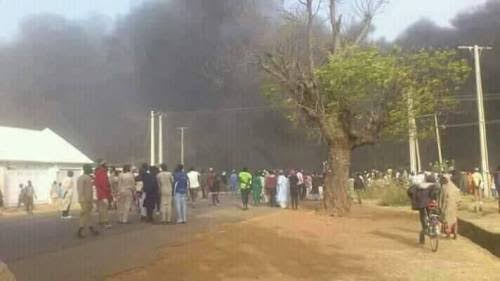 The Zamfara State police command has said that in the aftermath of protests in Shinkafi Local Government Area, properties worth N70 million were destroyed by angry residents.

Angry residents had on Sunday protested the security situation in the area, following the abduction of popular community volunteer and vigilante, Sama’ila Lagga.

The protesters attacked the palace of the Emir of Shinkafi, Muhammed Makwashe, and the residences of political appointees in the state, mostly those appointed to oversee peace dialogues with bandits in the Shinkafi area.

The police spokesperson in Zamfara, Muhammed Shehu, said following the protest, the command embarked on an assessment led by the commissioner, Abutu Yaro, in the affected council area.

According to the Commissioner who also visited the Emir’s Palace to empathise with the monarch, the Police Command has taken serious measures to ensure such an act does not occur in any part of the state

The commissioner added that the culprits will be arraigned at the end of the ongoing investigation. He warned everyone to desist from taking laws into their hands and to allow the constituted authority to exercise its duty.

Also, the commissioner held a town hall meeting, which was attended by many prominent personalities of Shinkafi. At the meeting, security issues were extensively discussed. The police solicited continuous community partnerships and enjoined armed non-state actors to embrace the ongoing peace process and disarm.

On his part, the Emir of Shinkafi Muhammed Makwashe, thanked the police boss for his quick response to the incident and promised the security agents of his Emirate’s continued support in everything that will promote security and safety of Shinkafi and Zamfara at large