…Threats & dangers to the Jonathan Presidency

The conventional wisdom is that the result of the last presidential election was simply a matter of an unpopular president Goodluck Jonathan losing to a more popular candidate, Gen. Muhammadu Buhari. Well, it’s not really as simple as that. Over three years ago – indeed, shortly after his election in 2011 – I had done a-3-part series, which eerily predicted the outcome of Jonathan’s administration and his eventual electoral fate.
I am reproducing the article here for you, dear readers, to see for yourself how history often repeats itself. And how right I was three years ago…. The series began last month 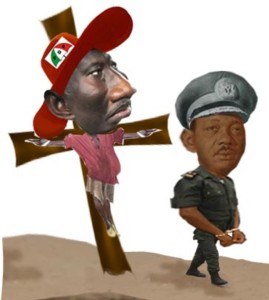 During the 2nd and 3rd republics, any Easterner who aspired to power usually went North to look for money. But for providence and Obasanjo, it would have been interesting to see how Jonathan would have gathered the resources to prosecute a presidential campaign. Now that he is in power, it will be interesting to see how Jonathan is empowering his people. During the Presidency of Shehu Shagari, Northern Alhajis acquired the import licenses which they sold to Igbo traders usually at a hefty premium. Now, who are those who would win the multi-billion naira contracts? Who gets the oil blocks? Who wins the licenses to lift crude? Who are appointed into the juicy ministries? In short, who are given the licenses to make money? Recently, this newspaper conducted a research to determine the ten biggest players in corporate Nigeria. Of the ten names published, not even one was from the former Eastern region. An Aliko Dangote, a Mike Adenuga, a Femi Otedola and a Jimoh Ibrahim is bigger than virtually any state in Jonathan’s part of town. And none of them is his kinsman! Each of these individuals was a product of a power system which created the enabling framework for them to emerge and succeed exceedingly. So, if you are wondering what is stopping Jonathan, maybe you will be comforted to know that I am wondering as well.
The Strategic Media
One of the indices of power, especially in a democracy, is ownership of the mass media. Long before this reporter wore diapers, operators in the power arena had identified the media as a crucial element in the perennial struggle to win, control and sustain power. Hitler, a consummate power player, realized the invaluable power of the mass media and so he put the famed Goebbels to effective use. Politics and power are sustained by propaganda, which is a direct product of the mass media. That is why in authoritarian states, ownership and control of the media are heavily restricted.
The aphorism that power flows from the ball-pen, still holds true, even though revisionist historians, pressured by the spectre of coups and counter-coups in the Africa of the late 21st century would rather opine that power flows from the barrel of the gun. In liberal societies, the mass media is not only a thriving industry, it is also a strong instrument of power. Indeed, the ability to influence, manipulate and control public opinion is essential in determining the control of power.

In Nigeria, mainly due to the realities of its late start in Western education, the North has lagged behind in the ownership and control of the mass media. Yet, the Northern oligarchy understood the power of the press, so it used its position in the Federal Government to support and finance the New Nigerian Newspaper, an ostensible Federal Government-owned institution, which mainly promoted and defended Northern interests. In the words of a former editor of the Newspaper, Mohammed Haruna, “that was the main reason the newspaper was set up.”
During her tenure as the United States Ambassador to the United Nations, Madeline Albright famously said that “CNN was the sixth member of the United Nations Security Council.”
In Nigeria, the mass media is primarily owned, controlled and dominated by the South West. In the muted battle for the control of Nigeria, the South West took over the media while the North retained the military and political power. He who controls the media actually controls the minds of the people. In Nigeria, the media have often functioned as the alternate government. In the last fifteen years, its power and influence have grown almost exponentially, especially in the pro-June 12 struggle and its aftermath. Adjunct members of the mass media fraternity are the civic organizations, including the plethora of human rights organizations, trade unions and even increasingly, Pentecostal Christian movements. At the informal level, all these groups are led by the veteran activist, Wole Soyinka and the successive generation of activists he has spawned. Unknown to many Nigerians, a serious disquiet arose about four years ago, among the South West elite that the region was losing its dominance of the mass media to the South South. This was in recognition of the South South growing strength in mass media ownership. Some of the more notable newspaper titles are owned by indigenes of the South South; Guardian, Thisday, Vanguard, Daily Independence. They also dominate the electronic media with Silverbird, Channels, AIT. Perhaps to underline the importance of the media, the South West moved and reclaimed the top spot with Bola Tinubu, Gbenga Daniel and Jimoh Ibrahim establishing media empires.
The lack of strong South East presence in the mass-media is indicative of the zone’s near-irrelevance in Nigeria’s political calculus. There is hardly an Igbo perspective to national issues, whether political, economic or social. The growing impotence of the South East is underlined by its muted voice and lack of a mouthpiece. Even Orji Kalu’s The Sun Newspaper, successful on the newsstand as it is, is effeminate and does not pack a punch! If you probe deeply, its dilemma arises from the fact that it does not have any original perspective to advocate, which in itself epitomizes Kalu’s pathetic viscosity.
However, what is remarkable is that despite the significant South South presence in mass media ownership, the Nigerian press is still dominated by the South West. The intellectual vision and world view of the press is decidedly western in thought, in logic and in spirit. The reason for this is simple, though it may not be immediately obvious to the un-discerning. The South South is virtually an extension of the South West. Thanks to Awo’s masterful politics, the South South states of Edo and Delta are virtually South Western in their politics and world view. That was why the AG, the UPN and the AC have all enjoyed popular following in the South South. At any rate, there was no South South for the greater part of Nigerian history. The South South states of Rivers, Cross River, Bayelsa and Akwa Ibom share more features in common with the South East, with which they owe a historical, socio-economic and even cultural legacy. So in the mass media, the South South is actually Yoruba. And at any rate, whereas the South South may own the newspapers, it is the South West intellectual manpower that run them. Even more crucially, it is the South West world view that they espouse, even when such is disguised as pro-democracy, human rights and anti-corruption crusades.