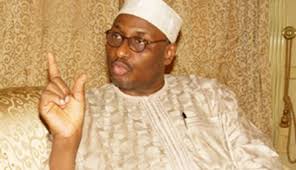 Despite the defeat of the Peoples Democratic Party (PDP) at the Presidential and National Assembly elections, the national chairman of the party, Adamu Mu’azu has charged the party’s governorship and state assembly candidates not to relent, but that they should go out and re enact the winning ways of the PDP.

PDP ruled out any band wagon effect, charging PDP members to ensure that the party wins Lagos, Rivers and Imo state in the April 11 governorship elections.

In a statement by the Media Assistant the PDP National Chairman, Tony Amadi, Muazu told the PDP Governorship and State Assembly candidates, “Next week’s governorship election will certainly provide the Peoples Democratic Party a soft-landing after conceding the Presidency to the All Progressive Congress in the Presidential election on March 28, 2015.”
‎

According to Muazu, “I urge the PDP faithful to pick up the pieces and ensure that we return quickly to our old winning ways. There should be no room for voter apathy that was a major factor to our loosing the presidential election. While our opponents were savouring their famous victory, we should out flank them and corner at least two thirds of the states of the Federal Republic of Nigeria.”

Muazu said that this act is not an impossible target,

“If we return to our elements with immediate effect. We have done it before and we can do it again. Nothing will be sweeter than PDP taking Lagos, our own Rivers State and Imo state. Our candidates in these states are first class material who have fully penetrated the political structures of those states and are set to win.

“Our target in this remaining election should be to retain our present states and then sink our teeth into the heart of our political opponents and show that their presidential victory is nothing more than a one-off that won’t won’t be repeated in a long while.”