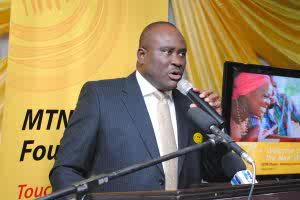 The MTN Group says it has reviewed its operating structure with a view to strengthening operational oversight, leadership, governance and regulatory compliance across its 22 country operations in Africa and the Middle East.

A statement made available to newsmen in Lagos on Thursday by the organisation, said that consequently, the MTN Nigeria’s Chief Executive Officer (CEO), Mr Michael Ikpoki, had tendered his resignation with immediate effect.

It said that the Head of Regulatory and Corporate Affairs, Mr Akinwale Goodluck, also tendered his resignation with immediate effect.

The group’s statement said that Ikpoki was replaced by Mr Ferdi Moolman as MTN Nigeria CEO, while Goodluck was replaced with Ms Amina Oyagbola, as its Head of Regulatory and Corporate Affairs.

Moolman, it said was previously the Chief Operating Officer (COO) at MTN Iran cell and most recently, the Chief Financial Officer (CFO) at MTN Nigeria.

The statement said that Nigerian national, Oyagbola, retained the position of MTN Nigeria’s Head of Human Resources, in addition to heading regulatory affairs at the Nigerian operating company.

It said that the search for the MTN group’s CEO was underway and remained a priority.

“The group has resolved to re-implement its previous reporting structure.

“To support this structure, MTN has made a number of senior appointments,’’ the statement noted.

It added that Desai, who is based in Johannesburg and has 14 year working experience at MTN, would report to the Executive Chairman, Mr Phuthuma Nhleko.

“She has previously held the positions of Chief Information Officer at MTN Nigeria and was Chief Operating Officer (COO) of MTN Iran cell.

“Desai was recently seconded to support the Nigerian country operations.

“Her replacement as Group Chief Technology and Information Officer will be announced soon.

The statement disclosed that two regional vice presidents had been appointed to report to the Executive Chairman.

According to the statement, Toriola has been at MTN for 10 years, having held senior operational roles at MTN Group and MTN Iran.

It said that Toriola was formerly also the Chief Technology Officer at MTN Nigeria and CEO at MTN Cameroon.

The statement added that Jaroudi had been CEO of MTN Syria since 2006 and prior to this, he held senior operational roles for Investcom’s subsidiaries across the Middle East and North Africa.

“Also reporting to the Executive Chairman is the new Group Executive for M&A, Mr Matthew Odgers.’’

“This will enable MTN to continue to realise its strategy and vision, while also ensuring we achieve high governance standards and robust risk mitigation.

“With the financial year closing on Dec. 31, 2015, the MTN Group will report its FY2015 results in line with the former structure, namely for MTN Nigeria, MTN South Africa, Large Operating Companies and Small Operating Companies,’’ the statement quoted Nhleko as saying. (NAN)