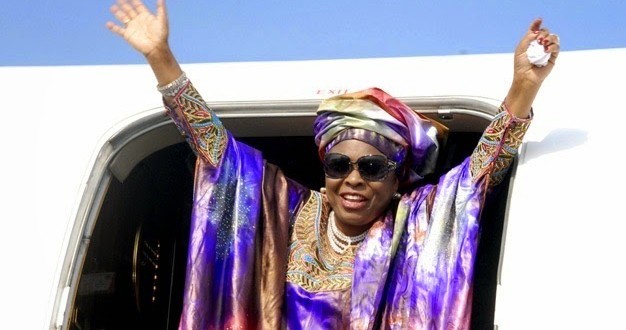 Mrs Patience Jonathan, has challenged women to always be responsible, and to use their positions to positively impact on the society and the less privileged.
She gave the challenge on Sunday in Abuja, at the Miss United Nations Nigeria Pageant 2015, while congratulating Miss Precious Chikwendu who won the 2014 edition of the pageant in Kingston, Jamaica.

The winners are to get a cash rewards and brand new cars.

The pageant had a category for singles, married women, single mothers and teens, because of its believe that every woman has a voice at any stage of her life.

The first lady expressed optimism that such pageants would enable contestants develop their personalities and make them stronger and passionate to positively impact on the society.

According to her, Chikwendu brought honor to Nigeria by virtue of her not only winning the crown, but the hosting right for the Nigerian version of the pageant.

She added that being a beauty Queen, was not easy as it seems, because the Queen has to be the best in whatever she does in order to achieve her goals.

The first Lady who was represented at the occasion by Mrs Peace Nnaji, however, added that the beauty of a woman grows with the passing years.

This, she said, goes to show the need for women to always take care of their appearance.

“Remember, looking good is worth all the troubles, this is because beauty is the totality of the state of a woman`s health, physically, psychologically and mentally,’’ she said.

The first lady, however, reminded the contestants that it was all right to lose, because there were no losers in pageants as all contestants were winners.

She also added that pageant was not only about winning the crown, but about what was done after the victory and charged the contestants to be responsible and useful to the society.

A character she said the outgoing Queen Chikwendu, had exhibited during her tenure.

The first lady added that on her part, she had through her various NGOs and programmes, encouraged the girl-child and women generally, to be who they want to be and express their natural talents.

She assured the outgoing Queen of her continued support in her determination to make young women better citizens.

Using her Snow White Foundation NGO, the outgoing Queen, said she adopted a lifecycle approach of development, focusing its interventions on children, their families and the larger community with emphasis on the less privileged.

According to her, beauty transcends the physical, is not just an outward thing, but the inner qualities of an individual.

She maintained that beauty pageant had moved beyond wearing crown and cat-walking to impact positively on the society.

The outgoing Queen, explained that the main focus of the pageant was to have volunteers who were ready to use beauty to add value to humanity.

“This sisterhood strengthens them to see beyond their immediate surroundings and situations and extends their services across the globe.

“As each contestant shares ideas of how she serves her community, more women would be strengthened and edified because their paths have crossed for good.” she said.

The News Agency of Nigeria (NAN) reports that contestants at the 2015 Nigerian version of the pageant, were accessed on the basis of character, personality, conversational skill, beauty, fashion and intelligence.

Mr Femi Fani-Kayode, Director Media and Publicity, the Peoples Democratic Party (PDP) Presidential Campaign Organisation and a formal Minister of Aviation, who was one of the special guests at the pageant, descried it as exceptional.

“This is a pageant with a different, am excited to be here and so proud about the contestants and the organisers of the event.

“Am particularly happy that the first lady said such nice things about the pageant and the organisers and her assurance of continues support,” he said.

The 2015 Miss United Nations Nigeria Pageant, was sponsored by Chikwendu, the outgoing Queen.