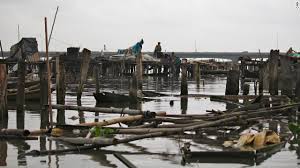 The Lagos State Government has disclosed its intention to build modern houses on Makoko waterfront to curb the decay in the ghetto.

This was made public through the Commissioner for Physical Planning and Urban Development, Toyin Ayinde during a news conference recently in Ikeja, Lagos state.

According to Ayinde, the housing scheme will be a replica of Lake Union Seattle, United States of America where houses are built on water in an organised manner.

He said that the daily migration of people to the city of Lagos continues to have serious impact on the population and that all aspects of the economy, including the issue of accommodation are affected.

“As a result of this, a lot of unplanned settlements and encroachments on both land and water by these immigrants have become a burden.

“The houses built on the Lagos Lagoon overtime in the Makoko area continued unabated and soon became worrisome due to the speedy and fast encroachment on this waterway and further extension towards the PHCN high tension cable on the lagoon. Consequently, the ministry found it expedient to undertake a study of this development and tagged it ‘Houses on Water’”, Ayinde said.

He further disclosed that the benefits of the project was to improve and enhance the living condition of the residents; control development on the waterways; increase the potential of the community economically; protect the highly valued waterfront against pollution and widespread contamination; to enhance water transportation and to promote tourism.

Apart from structures on the water, he said there would be schools, hospital, bank, shopping mall and fish processing plants to be built on the lagoon.

The commissioner stated that so far, visitation and stakeholders’ engagements were held recently with the occupants to secure their support and opinion on the proposed project, saying that the meeting was also intended to build their trust in the state government’s effort and capacity to re-plan their community.

“A technical team for the project has been identified while a proposal was presented to the State Executive Council for consideration and approval,” he stated.

Established in the 18th century primarily as a fishing village, much of Makoko rests on structures constructed on stilts above Lagos Lagoon. Makoko is a slum neighborhood located in Lagos and its population is estimated to be 85,840 though not officially counted during the 2007 census.