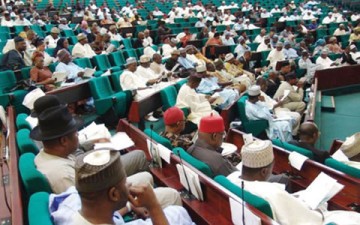 President Goodluck Jonathan’s letter to the National Assembly, rejecting
amendments to the 1999 Constitution, which was read on the floor of Senate
on Wednesday by Senate President, David Mark, was received with shock by
some members, who openly expressed surprise at the reasons why the
President vetoed the bill.

Chairman, Senate Committee on the Review of the 1999 Constitution (4th
Alteration Bill 2015),  Senator Ike Ekweremadu, announced that his members
would hold a two-day retreat from Wednesday to Thursday to review the
development.

Efforts by  members to subject Jonathan’s letter to debate were frustrated
by the Senate President, who said there was the need for them to have a
copy of the letter each before they would be able to make meaningful
contribution.

But  Senator Abubakar Yar’Adua (Katsina Central) raised a point of order
and insisted that the issue be discussed because of the serious fundamental
issues raised by Jonathan, which affected the integrity of the National
Assembly.

Yar’Adua said, “I think it is important for us to discuss that letter and
see whether there is need for us to consider the letter or not.

“I think the President has raised very serious fundamental issues,
especially in terms of our conscience as lawmakers and his own position as
the chief executive officer of the Federal Republic of Nigeria. That is why
I am raising this point or order.”

Although Mark agreed with Yar’Adua that the letter should be extensively
discussed, he maintained that the debate could only be meaningful after
members would have studied the letter at home.

“Obviously, this letter is not like any other normal letter. We can’t
discuss the letter unless you have a copy of it. So, the first reaction is
for me to make copies available to everybody and you go and study it.

“If you notice that there is an announcement also by the Constitution
Review Committee that they (members) are going to meet. So, that will
straight away go to them. I agree with you that weighty issues have been
raised. It’s a peculiar case; so everybody will be involved.”

It was observed that the members had started the retreat and will come up
with their position, which would also enable the Senate to take appropriate
action on the issue.

Jonathan, had in the letter, said he would not assent to the amendments
because they did not satisfy the strict requirements of Section 9(3) of the
1999 Constitution.

He queried the decision of the National Assembly to whittle down some
Executive powers of the President of the Federal Republic of Nigeria.

He also faulted some amendments which will give Executive powers and duties
to the Legislature and the Judiciary.

Jonathan made his position known in a seven-page letter to Senate President
David Mark and House of Representatives Speaker Aminu Tambuwal.

The President listed 12 errors in the amendments.

They are •Non-compliance with the threshold specified in Section 9(3) of
the 1999 Constitution on amendments;•Alteration to constitution cannot be
valid with mere voice votes unless supported by the votes of not less than
four-fifths majority all members of National Assembly and two-thirds of all
the 36 State Houses of Assembly.

Others are, the Right to free basic education and primary and maternal care
services imposed on private institutions; •Flagrant violation of the
doctrine of separation of powers; •Unjustified whittling down of the
Executive powers of the Federation vested in the President by virtue of
Section 5(1) of the 1999 Constitution;• and 30 days allowed for assent of
the President.