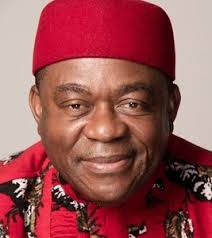 The four newly appointed transition committee chairmen of Aba-North, Aba-South, Umuahia-North and Umuahia-South as well as the Deputy Chairmen of Aba South and Aba North LGAs have been sworn-in.

Reading a riot act to the newly appointed chairmen and their deputies after they had taken their oath, the State Governor, Chief Theodore Orji, reminded them that their job is very important, especially with elections around the corner, warning that he would not want any security lapses in their various LGAs which he said are vital.

He said he expects total commitment and 100 percent loyalty to the party and the government from the TC chairmen and their deputies and called on them to avoid partisanship in the distribution of amenities in their constituencies.

The governor further advised them to avoid soiling their hands and enjoined them to go into the field and do the job diligently.

Responding on behalf of the others, the TC Chairman of Umuahia North LGA, Alhaji Suleiman Ukandu, thanked the governor for the confidence he reposed in them and assured him of their loyalty and commitment in the discharge of their duties.

It would be recalled that the former chairmen and their deputies were relieved of their posts following some discovered lapses in the areas during the March 28th presidential and National Assembly elections.