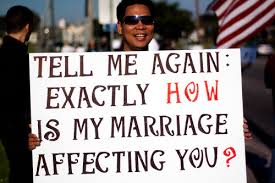 The recent decision by the United States Supreme Court to legalize gay marriage had, and is still generating reactions worldwide; for many, especially in Africa, it is one big victory for evil over good; to others however, it is victory for freedom against bondage. US President, Barack Obama described it as a victory for America. No matter how one looks at it nonetheless, one fact is certain:  it represents a growing acceptance of liberty over morality in the 21st century.

The controversy of gay marriage, of course, did not start today; it has always been there. As one observer jokingly put it “There was a time in America when it was unacceptable to be gay, then gradually it became acceptable and homosexuals began to proudly identify themselves. Yet it got to a point when it became ideal to be gay, the fear therefore is that there may come a time when it would be compulsory to be gay.” The later wouldn’t sound totally unrealistic to anyone who knows the amount of bullying those who refuse to accord gay couples due respect are subjected to in the US today.

While gay marriage had been a taboo, even in advanced countries like the US in the years past, it has consistently been a source of conflict in a sense, a huge part of the ever present conflict between observing God’s prescribed restrictions to human liberty in the form of God’s laws and the inherent desire of man for freedom; freedom to do whatever gives him fulfillment. Part of this debate has also included abortion, which has equally undergone different phases in its march towards acceptance, and just like gay marriage; it is legal in the US and a number of other countries. Although abortion presents more complicated circumstances, some of which make for a compelling argument in its favour, the question of rape for instance.

The gay marriage debate, one would agree, has always been a question of freedom against morality, and morality in this sense stems mainly from what is right or wrong, acceptable or unacceptable in line with the divinely sanctioned standards or quite simply the rules of the Almighty God. Although, some albeit mischievously, have tried to suggest that God did not condemn same sex marriage, the truth is that it negates Bible principles.

The current scenario is caused in part, perhaps by the fact that a lot of people no longer see homosexuality as a deviation from the proper sexual orientation. For the avoidance of doubt, marriage is naturally a union of a man and a woman and any other practice to the contrary is an abnormality. However, one stands a chance of being accused of insensitivity or intolerance as is the case for those who still muster the courage to insist that gay unions are  amisnomer in countries like the US. The argument that since it is a union between two consenting adults, gay marriage should be accepted stems perhaps from the cognizance that gay people did not chose to be gay… this of course is a topic for debate. But it ignores altogether, the fact that being gay is an anomaly which ought to be addressed rather than allowed to thrive in the name of liberty.

Obviously, the interpretation of the word liberty has continued to expand, especially in the face of growing decline of Christianity. Modern society has continued to advance, leaving behind the very root of civilization: religion; the belief in God. Obviously, due to man’s increasing desire for pleasure, he is finding it more convenient to jettison God’s rules which runs contrary to his mundane desires, and the simplest way to do this is to prove that God was not right to make those rules or deny that he didn’t make them altogether. But even worse, deny the very existence of God, this explains the rise in atheism worldwide, especially in Europe and America. This, in part, has contributed to the growth of Islam.

While Christians appear to be disillusioned by their fate, Muslims have largely managed to hold on to theirs, and the current wave of civilization has not eroded their core values. Take for instance, the recent sentencing of eight individuals to death for blasphemy in Kano State. Such would be unthinkable in any Christian setting today.

Recall, in the early days of the church a number of scientists were killed for daring to challenge the nature of the universe as it was known in the Christendom. For a fact, Christianity has evolved from a time when it was a crime to question God’s creation story or His interpretation of the universe to a time when it became ideal to disprove it, and eventually a time when it has, in fact, become in many people’s opinion, archaic to hold unto certain bible principles as it concerns humanity and human existence.

In some countries today, when a case of freedom and morality arises, those who hold unto moral values quickly become subjects of ridicule by the ever growing brigade of libertarians who hold that man should be free. Interestingly, elections are even won and lost on this basis. The defeat of many Republican candidates in the 2012 US election could rightly be attributed to issues of abortion and gay marriage which some of them are somewhat opposed to.

There is little doubt that proponents of same sax marriage are winning the battle gradually, even in the church. Though majority of Christian denominations still stand in opposition to gay marriage, the number of churches conducting same sex marriages are increasing, especially in theologically liberal churches in the West. Presently over 14 Christian denominations are conducting same sex marriages and there are still a number of Christians in the mainline Mainstream churches that hold views in favour of gay marriage.

Some scholars have also begun to argue that the word homosexual exists in many modern bible versions. Historian John Boswell claims the 4th century Christian martyrs Sergius and Bacchus were united in the rite of ‘brother-making’which he calls an early form of religious same sex marriage. Some gay couples are increasingly challenging religious organizations that refuse to recognize them. But the major challenge of the church in this regard, especially in advanced countries has come from somewhat oppressive government rules.

In America, the church is almost being bullied into compromise.

In recognition of the above trend, the Archbishop of Sydney, Anthony Fisher recently cautioned Christian couples to resist being bullied into redefining marriage. He insisted that the ideal marriage according to the bible is one that involves man and woman. “Marriage brings together man and woman, sex and love, love and babies, parents and children,” the bishop said to his congregation while insisting he was not meaning to criticize anyone.

But the important question is whether the church can hold on for long, especially now that evensome religious leaders and preachers are beginning to appear somewhat cowed, the number of staunch opponents of gay marriage is dropping; they would rather not address it to avoid any possible backlash.The Catholic Church and a few other conservative churches appear to be the staunchest opponents of gay unions so far but even this is shifting in advanced nations.

As pointed out earlier nonetheless, Islam appears to be the only religion that has offered much of uncompromising resistance to the growing trend, more because it does not often give room for such ‘vices.’ “Homosexuality is a grave sin in Islam because no one is born, said an Islamic scholar, Nurudeen Lawal. “Those who are advocating for it to be legalized do not belief in God or religion, they are Satanists or atheists. It is not accepted, Quran verses and Hadiths frowns at the act.”

As a continent, Africa’s resistance to gay marriage has come under threat from western powers who attempt to affect national sentiment through aid. Nigeria came under intense pressure from the US, Britain and other western nations when it prohibited gay unions in January 2014 under Goodluck Jonathan. Uganda and Mauritania had similar experience. The question is, can Africa resist for so long? It is perhaps one only time will tell.

November 27, 2022
Media aides of Peter Obi, the presidential candidate of Labour Party (LP), have explained why Bola Tinubu of the APC dreads facts and...

No to any wage increase