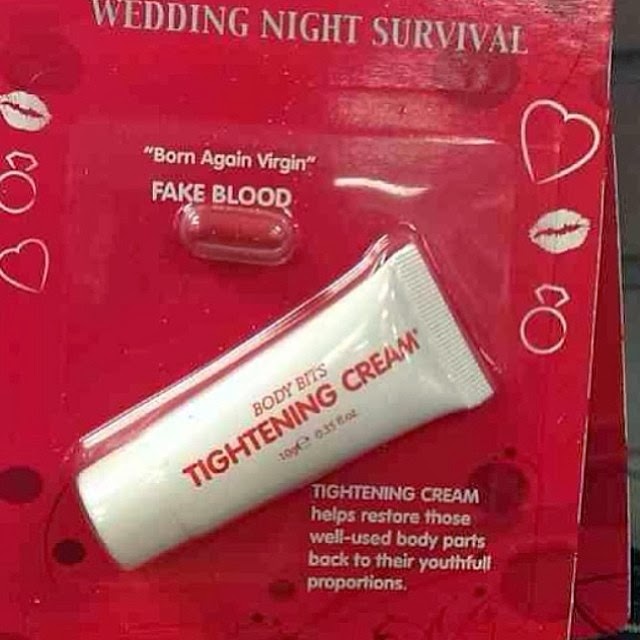 Although largely remaining a secret phenomena here in the West, the business of faking virginity for the purpose of social status and marriageability is a booming industry. Virginity fraud (AKA chastity fraud/the virginity lie) occurs when an individual lies about his/her virginity in order to gain something of value. Essentially, pretending you are a virgin when you’re not.

For non-virgin women living in the West whose familial traditions regard premarital sex as taboo and place heavy socio cultural significance on preserving female virginity (particularly as a prerequisite for marriage), the penalty of being “found out” may include being humiliated, ostracized, divorced or even physically harmed. Or, as one young Muslim living in Canada put it: Without proof of virginity, “others shun women as whores.”

Ethnically diverse women who may have spent all their lives in Western countries such as Australia commonly remain bound by the cultural expectations of their familial heritage. Like Tongan-Australian Inez Manu-Sione who really didn’t want to partake in her family’s “barbaric” ceremonial tradition, which required her to present her blood stained bed sheets to her extended family for inspection after her wedding night, but agreed to nonetheless in order to “honor” her mother.

Consequently, women who aren’t virgins commonly need to engage in elaborately deceptive activity to guarantee nuptial bleeding occurs, with suspicion of non-virginity often requiring women to prove themselves via virginity confirmation from a gynecologist.

A Sydney-based gynecologist, Dr Wafa Samen, who issues doctors certificates in English and Arabic to certify that a hymen is intact, receives requests from brides needing to prove their virginity to future husbands and in-laws, and brides who failed to bleed on their wedding night.

Do you know how women who fake their virginity actually get away with it, despite, perhaps, a multitude of prior penetrative sexual partners?

The going rate for re-virgination in Sydney is between $4,500 AUD and $6,500 AUD. That money buys you a hymen guaranteed to tear and bleed during penetrative intercourse and give you those blood stained sheets you’ve always wanted.

Cosmetic surgeon Les Blackstock, who takes pride in helping women in Australia fake their virginity who have lost it to premarital sex or sexual assault, declares: “I know that my hymens have passed inspection in Australia and overseas and not been detected.”

The subject of surgical hymen reconstruction to restore virginity, at least in appearance, isboth controversial and hotly debated. There is considerable argument supporting the notion that by accepting virginity restorative procedures we actually become co-conspirators with this moral crime of deception as we fail to distinguish between the concepts of virginity and chastity.

Findings from a recent study exploring 600 male and female Lebanese university students’ attitudes towards surgical hymen reconstruction revealed that 80 percent of students disapproved of hymenoplasty for reasons independent of gender and religious affiliation or founded on moral ethics and personal convictions. They deemed surgical hymen reconstruction as unacceptable based on the notion that it is both a “form of deceiving and cheating” (80.7 percent) and a “betrayal of honesty in the relationship” (80.4 percent).

But let’s not make the erroneous assumption that this practice is solely for women of Middle Eastern descent. There is also increasing demand among women from Orthodox Jewish and fundamentalist Christian backgrounds for hymeneal restoration surgery.

There is a real, definitive consumer market for women wanting to fake their virginity with various products and services catering to the arguably imposturous cause. There are vials containing small amounts of animal blood which brides conceal in their wedding dress and later poured over the bed sheets to fabricate virginity, Artificial Virginity Kits containing a prosthetic membrane inserted immediately before sex designed to simulate an intact hymen which squirts out fake blood upon penetration, and Artificial Hymen Pills vaginally inserted an hour before sex that break during intercourse to release realistic blood that the man thinks is virginity loss.

And the marketing on these fake-your-virginity websites is obscene. “Your husband won’t doubt your virginity when the capsule bursts during intercourse.” Or, “Kiss your deep dark secret goodbye and marry in confidence.” And, “Add in a few moans and groan,s and you will pass through undetected!” (What kind of karma do you expect to get when you enter a supposedly virtuous and holy marriage with someone founded on a blatant lie?)

I mean, imagine starting your intended lifelong marriage off based on an entire fallacy. On her wedding day, I would assume that the bride would be more guilt-ridden than “blushing,” and if the husband ever found out, he’d be beyond furious. Findings from the Lebanese study revealed that almost half of the men said they would divorce their wife based on virginity deception, and close to 10 percent of males proclaimed intent to physically harm or even murder their wives if they discovered that hymeneal restoration had taken place.

If I was a man, and I found out that my wife had faked her virginity (and EVEN got the surgery with the deliberate intent to deceive me), I would feel completely hurt and betrayed because she lied about by going to such great lengths to fool me. (After the re-virgination surgery, your hymen is once again intact, but how about your moral integrity?)

But don’t make the mistake of thinking that women of culturally or religiously conservative backgrounds are the only ones getting themselves re-virginized.

Women with enough cash to splash are getting the restorative surgery, too—only their motive isn’t based on evading marriage annulment, familial disownment or physical harm. Rich women are simply doing it as a gift to their lovers, symbolizing a renewal of their sex life.

Commenting on her disapproval of the growing popularity of virginity restoration in Vietnam (in the context of damaging female social status and perpetuating gender inequality), Director of the Institute of Social Sciences, Khuat Thu Hong poses this question: “Why don’t men do something as a gift for women? It’s always women who have to do something—from restructuring the hymen to beautifying the vagina.”