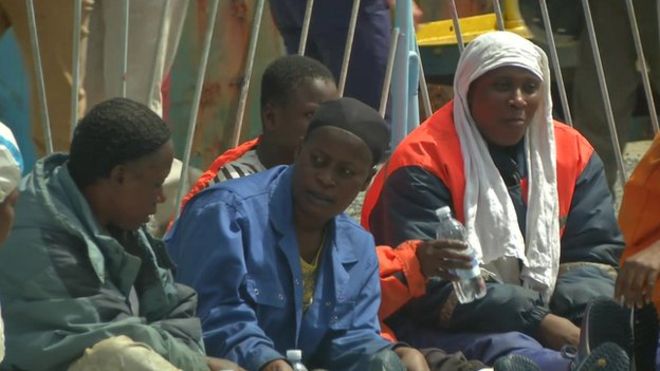 Dozens of migrants have drowned in the Mediterranean after a boat carrying an estimated 137 people sank south of Sicily, Save the Children says.

The aid group says survivors reported up to 40 people fell into the sea as a rescue vessel was approaching.

The survivors arrived in the city of Catania on Tuesday.

At least 1,750 people have died this year trying to cross the Mediterranean, a 20-fold increase on the same period in 2014.

Giovanna di Benedetto, Save the Children’s representative in Catania, said the latest sinking is thought to have happened on Sunday, but the exact toll was not known.

“They [survivors] said there were 137 people aboard an inflatable boat that deflated or exploded – it wasn’t clear – and that some of them fell overboard,” Ms di Benedetto told AFP news agency.

“Some said ‘very many’ died, others said ‘around 40’,” she added. The survivors were picked up by a Maltese merchant ship.

About 100 people were found on a second boat, with no deaths reported, the aid agency added.

The number of migrants attempting to make the perilous journey across the Mediterranean has risen in recent weeks as smugglers take advantage of fair weather.

In the past three days about 7,000 people have been rescued and 10 bodies recovered off the Libyan coast, according to the Italian coastguard.

Italian and French ships picked up survivors from wooden and rubber boats on at least 17 separate operations.

Meanwhile Turkey’s coastguard on Tuesday said it had rescued more than 600 people trying to cross the Aegean Sea in the past week, Reuters reports.

More than 400 were men, women and children fleeing Syria, while the rest came from Iraq, Afghanistan, Myanmar (also known as Burma) and various African countries, the office of the Izmir provincial governor is quoted as saying.

The latest deaths come as naval chiefs from 26 European countries are due to discuss the migrant crisis at talks in Naples, southern Italy.