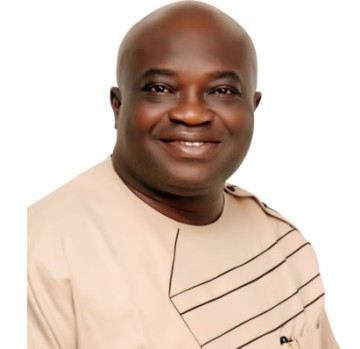 “Don’t call me His Excellency. Don’t add Executive to my name. Just address me simply as Dr. Okezie Ikpeazu, governor of Abia State”.

Why did that simple declaration by the Abia State governor  hit the world  like a thunderbolt? Why did the world have to respond to it with such jubilant hysteria, as   in a manner of mass reflex?  Why did it have to generate such  a resounding applause? The world re-echoed in unison that a Daniel has come to judgment, that the right man is here. Instantly,  Ikpeazu took a place in the heart of the world.  What an instant reputation!

But, it was not deliberately and strategically deployed and we did not anticipate the  applause  and the global endorsement that greeted the simple declaration.  We did not anticipate the instant fame! “Tell him to remain on that track,” an old-time boss, Okey Ifionu, advised in an SMS.  Such endorsements came in torrents, an avalanche of voices, all proclaiming that the sun has risen in Abia. Yet, the governor was just being himself and   being what he has chosen to be – the simple, quintessential servant leader. After all, what is in those appellations, His Excellency and Executive? Dr. Ikpeazu   says, “throw them into the trash can and let’s do the job.”

He would instruct me again: ‘Tell the people to remove all billboards and posters, bearing my portrait. Tell contractors not to put my portrait on their signages but to project their works. No praise-singing jingles. Let’s just do the work.” Already,  Ikpeazu has carved a niche and a world for himself by being the first to do a very simple thing. Call it innovation, yes, and what is he trying to do?  He is orchestrating a revolution in Nigeria as far as the person and the office of the governor is concerned by   demystifying the office and the person and removing  all the ceremonies and chivalries that disconnect the leader from the people. “I want to be the common governor for the common man,” he said.

Indeed, Ikpeazu  emerged from the people and will remain with the people. He  will soon go down in  our lore as the first common and ordinary governor in the history of Nigeria. His revolution will remove all the mystique and simulation that make the governor appear  like a transcendental being  and  remove all frivolities and trivialities that distract the leader from the major call, like chieftaincy titles, unnecessary awards and social recognition. “ He will remain available, approachable and accessible.”

Now, back to the question: why did that simple declaration excite the heart of world? First, it was a trail-blazer, a very novel positioning remarkably uncommon with political leaders in our clime. Second, it speaks about the man, his inner self and his  level of self-mastery and his mental predisposition. Thirdly and greatly, it is a signpost pointing to where he  is headed. The world is excited because they have not seen such show of humility and passion in power. From the time of the feudal lords, the empires and emperors, through the stages of world civilization to modern democracy, the holder of power has always  lived in an exclusively idealistic castle, with the mentality of the “chosen one”. Remember Shakespeare’s quote: “Mad world, mad kings, mad disposition”.  Ikpeazu is pulling the castle down.  He is changing the norm. He is discarding the tradition of the “chosen one” into the dustbin of history.

Indeed,  Ikpeazu’s signpost is pointing to three things: work, service, performance.  These are his main thrust and mission in government and his reputation will not be a media creation but will naturally relate to  his capacity to achieve these values for the people of Abia State.  These values will also be the parameter for evaluating him at the end of the day. As a delegate of the people with a divine mandate, he cannot delegate his duties and responsibilities but will personally take charge and supervise all projects, direct all commissions and oversee all works to ensure that things are done to his utmost satisfaction and for the general good of the people. And, he has taken off. Yes, he has!

Soon after his inauguration on May 29, he landed on the historic city of Aba to bring succour to the people. He immediately flagged off the reconstruction of seven roads, that sum up to 18.9 kilometres. The roads include Umuocham, Umuola and Ehere roads. Others are Ukaegbu, Kamalu, Umule and Ukwu mango in Faulks Road. “You will not compromise quality. You must do quality jobs and deliver on schedule   or be blacklisted by the state government,” he told the contractors on site. Work has begun in earnest and the governor is daring the rain. He is more on the street and on the roads, inspecting the progress of work than in the office. He is marching with the people, exchanging greetings and pleasantries as he moves. The Doc has not changed, he will not change. He remains the man of the people.

The rebuilding of roads and the general infrastructural renewal of Aba  remains a   top priority for Dr. Ikpeazu administration. The vision  is to bring Aba back to its old pride of place. To actualize the vision, Ikpeazu has to establish the Aba Urban Renewal office. The  office will be a key driving force of the administration and  the governor will show personal interest and commitment to the activities of the office in order to ensure it performs to the utmost expectation.  He  has gone a step further to  inaugurate the technical committee on the Abia state Intergrated Infrastructural Development Project aimed at bringing donor agencies and development partners to assist in the development of the state.

He has  stepped into the fabled land of Arochukwu to inspect the progress of   work on the 34kilometre Ndioji-Ndiokereke Arochukwu Road  which was stalled for some time now  and promised it will be completed by December this year. He was happy that 7 kilometre of the road has been asphalted with an additional 7km stone-based.

Yes, Dr. Ikpeazu is more on site than in the office and when you meet him, please, do not call him, His Excellency. Call him Doc.

Adindu is the Chief Press Secretary to the Governor