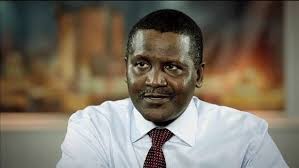 In furtherance of its expansion plan in African countries, Leading Cement manufacturers, Dangote Cement Plc will next week Thursday commission its 2.5million mtpa cement plant in Ethiopia as the company inches towards the mark of 40million mtpa total production capacity globally before the end of 2015.

A statement from the Dangote Group indicated that the government and the people of Ethiopia are excited about the timely completion of the project and the economic prospects of having such a huge company in that area of the country.

An invitation letter sent by the Dangote Cement to the Chief Executive Officer of one of the commercial banks showed that Nigerian guests would be flown to Ethiopia next week Wednesday, June 3 to witness the event on Thursday, June 5 and would be brought back to Nigeria on Friday, June 6.

The Dangote Cement plant said to be the single largest Investment by an African will be the fifth in the series of the offshore plants of the company that have rolled out cement within the last one year in African continent, coming after Senegal, Cameroon, South Africa and Zambia.

Nine other countries are on the card as the cement plants are in various stages of construction.

The company is investing $5 billion to build an African cement empire, with factories plants in 14 African countries.

Recently, its $300 million Greenfield cement plant in Senegal rolled products into the market in that country with the Senegalese government promises all assistance a required for Dangote Cement to perform maximally as its entry into the Senegal has stir up economic activities.

Nigeria Ambassador to Senegal and Mauritania, said “I am very proud of what Dangote is doing by promoting intra -African investments, promoting regional development, industrialisation and cohesion among African nations with his investments.

We need more Africans like Dangote to be at the forefront of promoting intra- African investments,” she stated.

According to her, Dangote Cement has done Nigeria proud with the commencement of production and that she was happy that Dangite Cement has been instantly accepted in the marker because of the high quality grade.