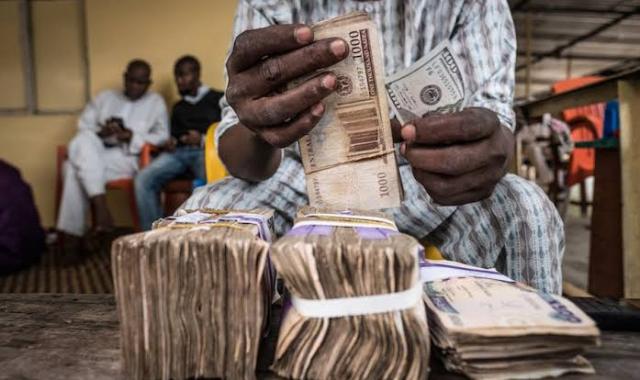 There are growing concerns that unless drastic measures are urgently taken, the current unprecedented downward spiral of the Naira may lead to a situation of hyperinflation.

Hyperinflation is a very high and typically accelerating inflation that quickly erodes the real value of the local currency, as the prices of all goods increase.

The fear became even more pronounced on Friday, with the local currency falling further against the U.S. dollar at the black market, exchanging hands with the hard currency at N545.00 per $1, according to abokiFX.com, a website that collates the parallel market rates in Lagos.

Also, the local currency lost further against the U.S dollar at the official Nafex window on Friday as foreign exchange supply sharply decreased at the market session.

According to data posted on the FMDQ securities exchange window where Forex is officially traded, Naira closed at N412.00 per $1 at the official window on Friday, translating to a N0.33 or 0.08 per cent devaluation from the N411.67 it exchanged in the previous session on Thursday.

The foreign exchange turnover decreased by 22.92 per cent with $88.39 million recorded at the market session against the $114.68 million posted in the previous session on Thursday.

Naira touched an intraday high of N400.00 and a low of N413.00 at the trading session before closing at N412.00 on Friday, leaving the spread between the official and unofficial market rates at N133.00 as of the close of business on Friday, with a margin of 24.40.

This is coming 45 days after the Central Bank of Nigeria (CBN) barred sale of forex to all bureau de change operators across the country. On July 27, 2021, the CBN ended the sales of Forex to BDCs saying the parallel market had become a conduit for illicit Forex flows and graft.

The CBN said it would also no longer process applications for BDC licences in the country. CBN governor, Godwin Emefiele, had announced that weekly sales of foreign exchange by the CBN would henceforth go directly to commercial banks.

Stakeholders had expressed optimism that the policy would bring about the much desired stability in the Forex market. For instance, the Committee of Banks Chief Executive Officers headed by the CEO of Access Bank, Herbert Wigwe, had stated on July 29 that the exchange rate would drop to around N423 to the dollar on the parallel market.

Also, on August 9, 2021, the Managing Director of Financial Derivatives Company Limited, Mr. Bismarck Rewane, said the Naira would rise in the parallel market towards 490-495 against the dollar in August/September.

However, findings show that since the CBNs latest Forex policy began in late June, the highest the Naira has reached on the parallel market is N504/$1.

But suspecting that the new Forex policy is a victim of sabotage, especially currency hoarding, the apex bank is not folding its arms over the situation, as it is rolling out measure upon measure to achieve total compliance.

This is even as it has increased dollar supply to banks by over 200 percent.

Accordingly, commercial banks in the country on Friday notified their customers that the identities of defaulters who circumvent the CBNs policy on Foreign Exchange would be published.

The notice was in compliance to the apex banks recent directive to all banks to publish the names and BVNs of customers who engage in fraudulent and unscrupulous practices to obtain foreign exchange from banks on their websites.

The CBN had said, Consequently, further to the various measures already put in place, all banks are hereby directed to publish on their websites the names and BVN of defaulting customers who present fake travel documents or cancel their tickets and fail to return the purchased PTA/BTA within two weeks as stipulated in the customer declaration form signed by them.

Already, both First Bank and United Bank for Africa (UBA) have alerted their customers of the implementation of the CBN policy. First Bank in an e-mail to its customers said, “We have been directed by the Central Bank of Nigeria to inform all our customers that unethical practices to circumvent the new CBN policy on the sale of forex, such as the presentation of false travel documents, visas, and the cancellation of flight tickets after purchasing personal travel allowance and business travel allowance, will no longer be tolerated.

“Defaulting customers who present fraudulent travel credentials or cancel their tickets and fail to refund the purchased PTA and BTA within two weeks, as stated in the signed customer declaration form, will have their identities and bank verification numbers published.

“We aim to implement this policy immediately as an organisation that is fully compliant with the Central Bank of Nigerias rules and regulations.

“Our bank is committed to partnering with the CBN to ensure a transparent, efficient and stable FX Market that meets the needs of all legitimate users.”

Also, UBA encouraged its customers to adhere to all CBN guidelines as directed. An e-mail sent by the bank read, “In line with our promise to keep you up to date on policies that may affect you, please note that the CBN has directed all banks to publish a list of PTA/BTA defaulters on their website.

“Customers involved in fraudulent practices such as presenting fake visas or cancelling airline tickets after receiving PTA/BTA and failing to return the funds received to the bank within two weeks will have their details published (name and BVN) on our website.”

Bawa gave the warning on Thursday during an interactive session with managing directors of banks at the Lagos Zonal Command of the commission.

According to a statement by the EFCC spokesman, Wilson Uwujiaren, the anti-graft agency boss charged the bankers to comply with the guidelines of CBN on the issuance of PTA and BTA to their customers.

You need to ensure full compliance with regard to knowing your customers and ensuring that you do not give opportunities for foreign exchange malpractices, he said.

Pointing out the salient issues EFCC will tackle, Bawa said, Some of the issues we have identified include foreign exchange malpractices and fraudulent election financing.

A manufacturer, Mr. Jude Onwukwe, told BusinessHallmark that the situation has become so bad that only very drastic measures can bring inflation under some level of control.

“I’m afraid the rate at which our Naira is depreciating, it may get to N600 or N700 to a dollar and then becomes ordinary paper with no value, Onwukwe said.

“If that happens, it will be a disaster for a highly import-dependent country like Nigeria.”

On his part, a business analyst, Mr. Moses Omolade, expressed fears that Nigeria may be going the way of Venezuela if care is not taking.

‘People are crying now that things are expensive, even when the items are available for them to buy,” he said.

“If the erosion of the value of the Naira continues the way it is going, a time may come when people will have their money, but it will not fetch them anything.”

Although Nigerias headline inflation retreated for the second time in May, dropping from 18.12 per cent reported in April to 17.93 per cent, Nigerians in the middle class segment insisted that the high cost of living has become almost unbearable for them, adding that they were getting poorer by the day.

The situation has seen some economists and allied professionals charging the government to retool its policies towards jumpstarting industrialisation, saying only active production could save the countrys economy from total collapse.

Speaking on Thursday, Mr. Bismarck Rewane, observed that Nigerias GDP is rising and inflation rate is falling, but more people are living below the poverty line.