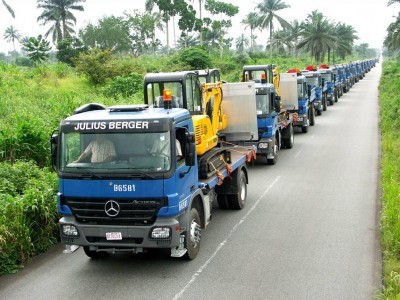 By Bayo OBAJEMU
Staffers at the Kingsway Road Ikoyi office of the construction  giant, Julius Bergers are currently  embarking on industrial action  over poor treatments,  low wages and lack of insurance cover in the event  of industrial accident.

In a chat with Business Hallmark  some of the striking staff who craved anonymity to avoid victimisation  said they work under terrible conditions  without requisite compensation.

“We leave our houses around 3am get to office by 7am because  of traffics,  we get to work immediately without food as they won’t  allow us to eat .We are paid pittance. Look at that massive structure  (pointing to a massive building under construction  said to belong to the oil mogul,  Mrs.Alakija) it cost  over N165 billion ,and we the staff doing the work are paid pittance “,one of the staff told this reporter.