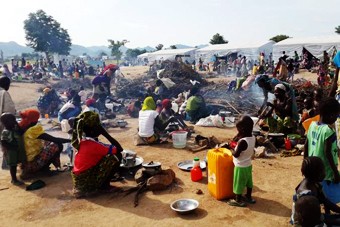 The United Nations launched an appeal on Thursday to raise $174.4 million to support refugees who fled to Chad, Niger and Cameroon to escape northern Nigeria’s Boko Haram Islamist insurgency.

The 23 UN agencies and NGOs involved in the support plan each drew up their cost estimates, which came to a combined $174.4 million.

Boko Haram fighters have killed thousands of people in their six-year bid to create an Islamist emirate in northeastern part of the country.

In spite of the fact that a military campaign by Nigeria and its neighbours has driven Boko Haram out of many positions it previously held, the U.N. still expects refugee numbers to rise from 192,000 to 240,000 by the end of this year.

The refugees, some of whom walked or even swam long distances to escape the violence, are spread out across the countries bordering Lake Chad in a mostly arid zone that encompasses some of the poorest regions of the world.

Most of them are sheltering with local residents, rather than in refugee camps, partly out of fear of becoming targets for cross-border reprisal attacks.

“Boko Haram has been so vicious in targeting civilians that there is a psychosis among the refugees,” said Robert Piper, the U.N.’s Regional Humanitarian Coordinator for the Sahel region.

“But this means they are spread out and logistically it is much more difficult to reach them,” he said.

In addition to the refugees, there are more than 1.1 million people displaced within northeast Nigeria by Boko Haram, the U.N. stated.