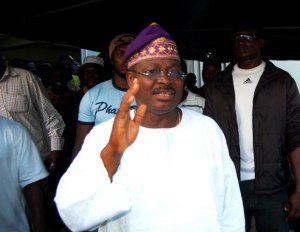 The second term jinx which has been synonymous with Oyo state politicssince the first republic has now been broken by the incumbentgovernor, Senator AbiolaAjimobi, who defeated his closest rivals,Senator RashidiLadoja and Otunba Adebayo AlaoAkala.
Ajimobi pulled a total votes of 327,310 to emerge the winner of thegovernorship election which was keenly contested by five candidates ofthe Accord Party, Senator Ladoja; All Progressives Congress (APC)Senator Ajimobi; Social Democratic Party (SDP) Engineer SeyiMakinde; Labour Party (LP) OtunbaAkala and the Peoples DemocraticParty (PDP) Senator TeslimFolarin.
As it was speculated before the election, the candidate of the PDPSenator Folarin performed below expectation as he failed to win asingle local government out of the 33 local governments in the state.
Ajimobi won in 20 Local governments with the total votes of 327,310 toLadoja who came second with eight Local governments and a total of254,522 votes and Akala with six local governments had 182,723 votes.
Folarin without any local government scored abysmal votes of 78,119and Makinde with no local government as well had 54,000 votes.The composition of the state Assembly would now be APC 18 seats,Accord Party 8 and Labour party 6 seats. This now means that the totalseats of the opposition would be 16.
With the result of the election, Ajimobi would now spend another fouryears in office and this has now made him the first governor that willwin a second term in Oyo state.
Right from the second republic when the Unity Party came into powerwith the late Attorney General of the Federation, Chief Bola Ige asthe governor, he only spent a term before Dr OmololuOlunloyo of thedefunct National Party of Nigeria came into power.

The late ChiefKolapoIshola, who ruled the state under the platform of the SocialDemocratic Party, also occupied the Agodi Government House for just aterm. Akala and Ladoja, who ruled under the PDP, were not given asecond chance but now Ajimobi who drove Akala out of office is nowcomfortable with a second term of four years. The result of theelection has now given Ajimobi majority in the state

House of Assemblyand he would not have to rely on any of the political parties to rulethe state as it was the situation in 2011, when he had to reach anaccord with the Ladoja’s Accord Party for him to be comfortable withthe state Assembly. The accord eventually broke down and this putAjimobi in a very tight situation until the last Saturday’s election.

The evidence that Folarin and the PDP would perform woefully in thegovernorship election, despite the high hopes put on the presidencyand leaders of the party in Abuja manifested on Saturday, when notableleaders of the party across the state, failed to vote or mobilize forhim as they did during the Presidential election.
OloyeJumokeAkinjide, who happens to be from the same localgovernment with Folarin failed to show up at her polling unit to vote.

Even there was a serious apathy against Folarin in his polling unitwhen voters there insisted that he should not be given specialpriority and confronted him openly that he must join the queue.
Theysaid that they don’t regard him as their next governor. They alsoaccused him of being stingy and self centred. Majority of those whoopenly abused him are women and from the situation witnessed, it wasglaring that they are members of the Accord party. Despite the factthat he came to the polling unit with heavily armed police men, hestood quietly at a corner without altering a word.
Meanwhile, supporters of Ajimobi have started jubilating in Ibadan thestate capital. They were driving dangerously in a motorcade, whilesome of them have stormed drinking joints at Mokola, Total Garden,Bere, Oje, Itutaba, Challenge and Apata areas of Ibadan. The same kind of jubilations were recorded in other parts of Oyo state, likeIseyin, Oyo, Shaki, IgbetiOnaara and even Ogbomosho, Akala’s base.

There was however a mild drama at the INEC office when the result ofthe election was to be announced. As the electoral officer called allthe party agents to sign the result before it would be announced, theagent of the Accord Party who is also the National Secretary of theparty, Mr.NureniAdisa refused saying that he had been instructed notto sign the result because they have found out that the figures wereawarded to the political parties as what they had on the field did notreflect the final figures announced by INEC.

But one of the chieftains of the APC, who was the agent of GovernorAjimobi, Mr.MojeedOlaoya said he had the right to decide what suitshim, adding that what was sure was the fact that the people of thestate have spoken. 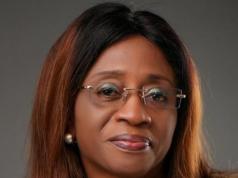