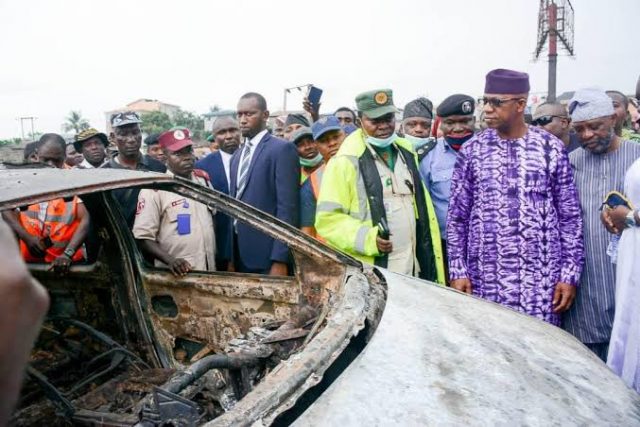 Ogun State Government has banned tankers and other articulated vehicles from plying overhead bridges in the State, just as those who flout the order would be made to pay stiff penalty.

The State Governor, Prince Dapo Abiodun who gave the order after inspecting an accident scene caused by a petrol tanker at Kuto, Abeokuta, said henceforth, tanker drivers would no longer be allow to use the bridges.

“Tanker drivers will no longer be allowed to use the bridges. Anything that has trailer behind it, be it trailers, flatbeds and other articulated vehicles of either 33 or 66 tons, are henceforth ban from using the bridges”, he ordered.

The Governor who recalled similar accident at Ota in 2019, also stated that the State would enforce road worthiness to ensure that articulated vehicles plying the State’s roads are worthy to avoid such future occurrences.

“We are going to enforce strict road worthiness on tankers and other articulated vehicles to ensure that they are mechanically good to use our roads”, the Governor noted.

On what caused the accident, the Governor said, “as at 8am, it was reported that a tanker coming from Sagamu and heading towards Abeokuta with full load of 33,000 litres of PMS, suffered break failure as it was descending the Kuto flyover”.

“The driver tried to warn people and in the process of trying to control the vehicle, it swerve to across the median and collided with other vehicles and motorcycles and tumbled. Three instant fatalities were recorded, while six people suffered various degree of burnt”, the Governor recalled.

He described the accident as an unfortunate event, saying that six of the injured, three each, have been admitted at the State Hospital Ijaye and Federal Medical Centre, Idi Aba, just as government has invited Burnt Specialists from Lagos to attend to those with severe burnt.

Prince Abiodun regretted that a bridge that was constructed to solve one problem, as ended up creating another, adding that the State government would carry out a comprehensive and well thought out plan aimed at tackling the menace.

While commiserating with the families of those who lost their loved ones, Governor Abiodun pledged that his administration would ensure that those who sustained injuries are well taken care off and those whose properties were affected are assisted to ameliorate their losses.

The Governor also visited the injured at the State Hospital Ijaye and the Federal Medical Centre, Abeokuta.